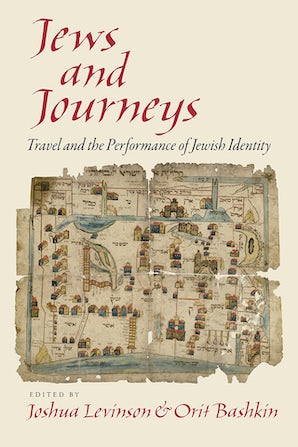 Travel and the Performance of Jewish Identity

Journeys of dislocation and return, of discovery and conquest hold a prominent place in the imagination of many cultures. Wherever an individual or community may be located, it would seem, there is always the dream of being elsewhere. This has been especially true throughout the ages for Jews, for whom the promises and perils of travel have influenced both their own sense of self and their identity in the eyes of others.

How does travel writing, as a genre, produce representations of the world of others, against which one's own self can be invented or explored? And what happens when Jewish authors in particular—whether by force or of their own free will, whether in reality or in the imagination—travel from one place to another? How has travel figured in the formation of Jewish identity, and what cultural and ideological work is performed by texts that document or figure specifically Jewish travel? Featuring essays on topics that range from Abraham as a traveler in biblical narrative to the guest book entries at contemporary Israeli museum and memorial sites; from the marvels medieval travelers claim to have encountered to eighteenth-century Jewish critiques of Orientalism; from the Wandering Jew of legend to one mid-twentieth-century Yiddish writer's accounts of his travels through Peru, Jews and Journeys explores what it is about travel writing that enables it to become one of the central mechanisms for exploring the realities and fictions of individual and collective identity.

"The most important contribution of Jews and Journeys is its focus on those dynamics of Jewish travel literature that upend basic assumptions of much recent scholarship about travel."—Jewish Review of Books

"How do Jewish travel narratives function as a vehicle of cultural self-perception? This question serves as a guiding principle for all the contributions in this volume, which presents a longue durée of Jewish travel writing from biblical times to the present. Jews and Journeys is a timely and relevant volume, speaking to a trend in Jewish historiography that looks increasingly beyond the local and towards transnational and cross-cultural connections."—Matthias Lehmann, University of California, Irvine