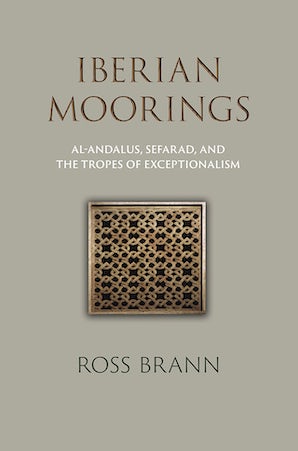 Al-Andalus, Sefarad, and the Tropes of Exceptionalism

To Christians the Iberian Peninsula was Hispania, to Muslims al-Andalus, and to Jews Sefarad. As much as these were all names given to the same real place, the names also constituted ideas, and like all ideas, they have histories of their own. To some, al-Andalus and Sefarad were the subjects of conventional expressions of attachment to and pride in homeland of the universal sort displayed in other Islamic lands and Jewish communities; but other Muslim and Jewish political, literary, and religious actors variously developed the notion that al-Andalus or Sefarad, its inhabitants, and their culture were exceptional and destined to play a central role in the history of their peoples.

In Iberian Moorings Ross Brann traces how al-Andalus and Sefarad were invested with special political, cultural, and historical significance across the Middle Ages. This is the first work to analyze the tropes of Andalusi and Sefardi exceptionalism in comparative perspective. Brann focuses on the social power of these tropes in Andalusi Islamic and Sefardi Jewish cultures from the tenth through the twelfth century and reflects on their enduring influence and its expressions in scholarship, literature, and film down to the present day.

"Iberian Moorings is a truly illuminating journey through the history of a cultural construct whose ramifications reach well beyond the scope of either Medieval, or Near Eastern Studies. Through his erudite and highly readable text, Professor Ross Brann portrays the medieval Islamic world of the Mediterranean basin as a fascinating landscape of cultural intersections, economic cooperation and competing ideological and political discourses, which reverberate in diverse identity-building narratives to this day."—Bulletin of Spanish Studies

"The conclusion, a masterful converging of two centuries of scrutinizing al-Andalus and Sepharad, is a compendium that shows the breadth (and potential pitfalls) of ideological possibility in these terms alongside their capacity to embrace evolving methodological approaches amid shifting disciplinary boundaries...Iberian Moorings is much broader than the sum of its interwoven studies, and by innovating even while acknowledging the dangerous allure contained within the ideas of al-Andalus and Sepharad, Brann honors the rigorous and thoughtful approach to the study of these ideas."—AJS Reviews

"Iberian Moorings constitutes an original and compelling contribution to several disciplines that have woefully divided scholarship on Islamic al-Andalus from that of Hebrew Sefarad, and both from the bulk of scholarship on Christian Spain and western Europe. The study is the first of which I am aware to offer a full, diachronic and multivalenced investigation of the long-nurtured belief of Andalusi Muslim and Jewish elites in their cultural superiority and uniqueness, and the afterlife of that belief into our own times."—Susan Einbinder, University of Connecticut