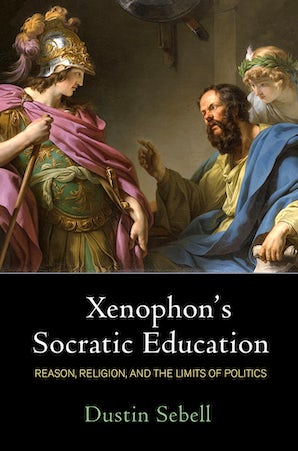 Reason, Religion, and the Limits of Politics

It is well known that Socrates was executed by the city of Athens for not believing in the gods and for corrupting the youth. Despite this, it is not widely known what he really thought, or taught the youth to think, about philosophy, the gods, and political affairs. Of the few authors we rely on for firsthand knowledge of Socrates—Aristophanes, Xenophon, Plato, and Aristotle—only Xenophon, the least read of the four, lays out the whole Socratic education in systematic order.

In Xenophon's Socratic Education, through a careful reading of Book IV of Xenophon's Memorabilia, Dustin Sebell shows how Socrates ascended, with his students in tow, from opinions about morality or politics and religion to knowledge of such things. Besides revealing what it was that Socrates really thought—about everything from self-knowledge to happiness, natural theology to natural law, and rhetoric to dialectic—Sebell demonstrates how Socrates taught promising youths, like Xenophon or Plato, only indirectly: by jokingly teaching unpromising youths in their presence. Sebell ultimately shows how Socrates, the founder of moral and political philosophy, sought and found an answer to the all-important question: should we take our bearings in life from human reason, or revealed religion?

Part One
Chapter 1. Socratic Rhetoric
Chapter 2. Can Politics Be Taught?

Part Two
Chapter 3. Justice and the Weakness of Writing
Chapter 4. Self-Knowledge and the Hope for Happiness

"Dustin Sebell is a master of close reading and reasoning. His novel treatment of Book IV of the Memorabilia shows how the Socratic understanding of justice and civic life serves as the basis for both political and natural philosophy."—Christopher Nadon, Claremont McKenna College

"Sebell has written a penetrating analysis...[and]sets out a clear thesis that he (successfully) seeks to defend: Socrates encouraged promising students to arrive at his considered judgments about morality, politics, and theological matters by jokingly educating other less promising students in their presence. In the process, Sebell also guides the reader to those considered judgments."—Review of Politics

"Extraordinary in its precision, rigor, and power of argument, Dustin Sebell's book makes the persuasive case that through the mists of the joking education of the ridiculous Euthydemus we can see the heart of a serious Socratic education."—Devin Stauffer, University of Texas at Austin