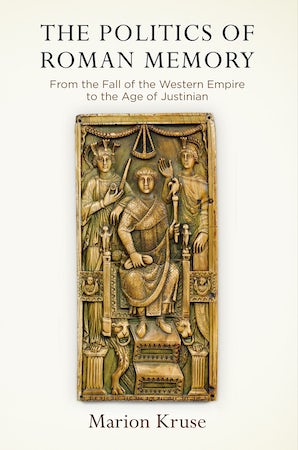 The Politics of Roman Memory

What did it mean to be Roman after the fall of the western Roman empire in 476, and what were the implications of new formulations of Roman identity for the inhabitants of both east and west? How could an empire be Roman when it was, in fact, at war with Rome? How did these issues motivate and shape historical constructions of Constantinople as the New Rome? And how did the idea that a Roman empire could fall influence political rhetoric in Constantinople? In The Politics of Roman Memory, Marion Kruse visits and revisits these questions to explore the process by which the emperors, historians, jurists, antiquarians, and poets of the eastern Roman empire employed both history and mythologized versions of the same to reimagine themselves not merely as Romans but as the only Romans worthy of the name.

The Politics of Roman Memory challenges conventional narratives of the transformation of the classical world, the supremacy of Christian identity in late antiquity, and the low literary merit of writers in this period. Kruse reconstructs a coherent intellectual movement in Constantinople that redefined Romanness in a Constantinopolitan idiom through the manipulation of Roman historical memory. Debates over the historical parameters of Romanness drew the attention of figures as diverse as Zosimos—long dismissed as a cranky pagan outlier, but here rehabilitated—and the emperor Justinian, as well as the major authors of Justinian's reign, such as Prokopios, Ioannes Lydos, and Jordanes. Finally, by examining the narratives embedded in Justinian's laws, Kruse demonstrates the importance of historical memory to the construction of imperial authority.

A Note on Transliteration

Introduction. Roman History After the Fall of Rome
Chapter 1. New Romans in the Age of Anastasius
Chapter 2. Mythistory and Cultural Identity in New Rome
Chapter 3. Administrative Reform and Republican History
Chapter 4. The Abolition of the Consulship
Chapter 5. The Fall of Rome in the Age of Justinian
Chapter 6. Apostolic History and the Church of (New) Rome
Conclusion

Appendix 1. Selected Chronology of the Fifth and Sixth Centuries AD
Appendix 2. Ordinations of the Bishops of Rome and Constantinople

"The Politics of Roman Memory is an exciting addition to the scholarship about the intellectual and literary directions of both Justinian's Constantinople and the wider sixth-century Mediterranean world."—Edward Watts, University of California, San Diego

"Highlighting an often overlooked group of authors and a time period often bypassed by memory studies, Marion Kruse persuasively articulates the ongoing but changing significance of the city of Rome for literate elites of early- to mid-sixth century Constantinople."—Jacob Latham, University of Tennessee, Knoxville