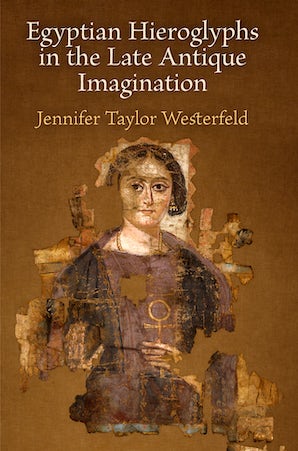 Throughout the pharaonic period, hieroglyphs served both practical and aesthetic purposes. Carved on stelae, statues, and temple walls, hieroglyphic inscriptions were one of the most prominent and distinctive features of ancient Egyptian visual culture. For both the literate minority of Egyptians and the vast illiterate majority of the population, hieroglyphs possessed a potent symbolic value that went beyond their capacity to render language visible. For nearly three thousand years, the hieroglyphic script remained closely bound to indigenous notions of religious and cultural identity.

By the late antique period, literacy in hieroglyphs had been almost entirely lost. However, the monumental temples and tombs that marked the Egyptian landscape, together with the hieroglyphic inscriptions that adorned them, still stood as inescapable reminders that Christianity was a relatively new arrival to the ancient land of the pharaohs. In Egyptian Hieroglyphs in the Late Antique Imagination, Jennifer Westerfeld argues that depictions of hieroglyphic inscriptions in late antique Christian texts reflect the authors' attitudes toward Egypt's pharaonic past. Whether hieroglyphs were condemned as idolatrous images or valued as a source of mystical knowledge, control over the representation and interpretation of hieroglyphic texts constituted an important source of Christian authority.

Westerfeld examines the ways in which hieroglyphs are deployed in the works of Eusebius and Augustine, to debate biblical chronology; in Greek, Roman, and patristic sources, to claim that hieroglyphs encoded the mysteries of the Egyptian priesthood; and in a polemical sermon by the fifth-century monastic leader Shenoute of Atripe, to argue that hieroglyphs should be destroyed lest they promote a return to idolatry. She argues that, in the absence of any genuine understanding of hieroglyphic writing, late antique Christian authors were able to take this powerful symbol of Egyptian identity and manipulate it to serve their particular theological and ideological ends.

"Jennifer Taylor Westerfeld presents a logical narrative, with a clear arc, describing how Christian writers made use of the cultural heritage of pharaonic Egypt. An excellent treatment of a very complicated subject."—Richard Jasnow, Johns Hopkins University