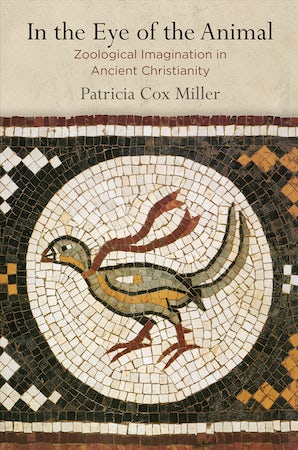 In the Eye of the Animal

Early Christian theology posited a strict division between animals and humans. Nevertheless, animal figures abound in early Christian literature and art—from Augustine's renowned "wonder at the agility of the mosquito on the wing," to vivid exegeses of the six days of creation detailed in Genesis—and when they appear, the distinctions between human and animal are often dissolved. How, asks Patricia Cox Miller, does one account for the stunning zoological imagination found in a wide variety of genres of ancient Christian texts?

In the Eye of the Animal complicates the role of animals in early Christian thought by showing how textual and artistic images and interpretive procedures actually celebrated a continuum of human and animal life. Synthesizing early Christian studies, contemporary philosophy, animal studies, ethology, and modern poetry, Miller identifies two contradictory strands in early Christian thinking about animals. The dominant thread viewed the body and soul of the human being as dominical, or the crowning achievement of creation; animals, with their defective souls, related to humans only as reminders of the brutish physical form. However, the second strand relied upon the idea of a continuum of animal life, which enabled comparisons between animals and humans. This second tendency, explains Miller, arises particularly in early Christian literature in which ascetic identity, the body, and ethics intersect. She explores the tension between these modes by tracing the image of the animal in early Christian literature, from the ethical animal behavior on display in Basil of Caesarea's Hexaemeron and the anonymous Physiologus, to the role of animals in articulating erotic desire, and from the idyllic intimacy of monks and animals in literature of desert ascetism to early Christian art that envisions paradise through human-animal symbiosis.

Appendix: Ancient Christian and Other Authors

"Miller powerfully demonstrates the usefulness of animal studies as a lens for ancient and late ancient discourse about animals, and presses at the edges of conventional analysis, arguing for the usefulness of early Christian texts in contemporary constructive philosophical work regarding the status of animals, and for the relevance of contemporary zoological writings in contextualizing and analyzing early Christian texts. The result is a thoughtful and provocative book."—Bryn Mawr Classical Review

"Miller's book is an important contribution to the field of Christian late antiquity from the perspective of (human-)animal studies, as it provides a panorama of relevant texts which also comprises 'bizarre' and amusing examples . . . What is more, she makes the world of early Christianity accessible for those who are not specialists in Patristics."—Philosophy, Theology and the Sciences

"Through incandescent prose and close readings, this monograph charts new pathways for exploring the archive of Christian literature . . . In the Eye of the Animal trains us to see anew the breadth of early Christian literature in all its diversity and pulsing liveliness."—Theological Studies Journal