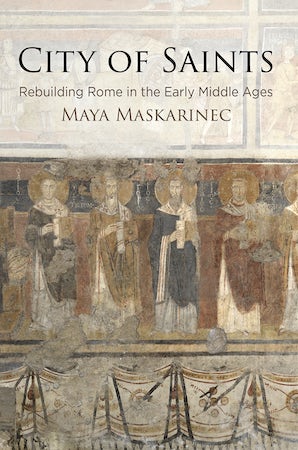 It was far from inevitable that Rome would emerge as the spiritual center of Western Christianity in the early Middle Ages. After the move of the Empire's capital to Constantinople in the fourth century and the Gothic Wars in the sixth century, Rome was gradually depleted physically, economically, and politically. How then, asks Maya Maskarinec, did this exhausted city, with limited Christian presence, transform over the course of the sixth through ninth centuries into a seemingly inexhaustible reservoir of sanctity?

Conventional narratives explain the rise of Christian Rome as resulting from an increasingly powerful papacy. In City of Saints, Maskarinec looks outward, to examine how Rome interacted with the wider Mediterranean world in the Byzantine period. During the early Middle Ages, the city imported dozens of saints and their legends, naturalized them, and physically layered their cults onto the city's imperial and sacred topography. Maskarinec documents Rome's spectacular physical transformation, drawing on church architecture, frescoes, mosaics, inscriptions, Greek and Latin hagiographical texts, and less-studied documents that attest to the commemoration of these foreign saints. These sources reveal a vibrant plurality of voices—Byzantine administrators, refugees, aristocrats, monks, pilgrims, and others—who shaped a distinctly Roman version of Christianity. City of Saints extends its analysis to the end of the ninth century, when the city's ties to the Byzantine world weakened. Rome's political and economic orbits moved toward the Carolingian world, where the saints' cults circulated, valorizing Rome's burgeoning claims as a microcosm of the "universal" Christian church.

"Maskarinec's evocative reading of the diverse array of saints is grounded in the author's extensive knowledge of the complex physical history of early medieval Rome. City of Saints charts new territory in attending to audiences' perceptions of saints and the monuments dedicated to them and thereby uncovers how sanctity redeemed buildings surviving from Rome's classical past, since narratives about saints shaped both responses to antiquity and the growth of the city's early medieval built fabric."—Speculum

"Considerable strengths undergird this study. The author's expertise on the topography and legends of the city of Rome are evident throughout; her reading is broad and current . . . Excellent maps and plates (often photographed by the author herself ) are liberally spread throughout the volume,and they complement the story she tells. The reader comes away with a visceral sense of what it meant to live in medieval Rome and how the veneration of saints was woven into the urban fabric."—The Journal of Religion

"City of Saints is an exceptional piece of scholarship, readable, even inviting. It might be the most important analysis of popular Christianity for the city of Rome in the early Middle Ages."—George Demacopoulos, Fordham University

"Maya Maskarinec has done more than any author before her to explain why (and how) saints came to be inserted into and associated with particular places in Rome. It is rare to see a scholar with such a solid command of both the hagiographical literature and the most current scholarship on Roman archaeology, topography, and social history."—Hendrik Dey, Hunter College