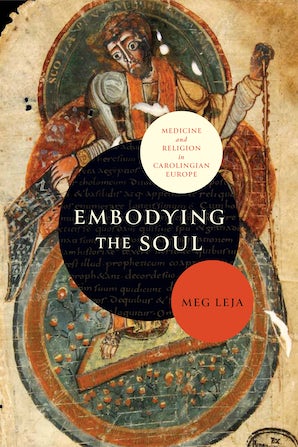 Medicine and Religion in Carolingian Europe

Embodying the Soul explores the possibilities and limitations of human intervention in the body's health across the ninth-century Carolingian Empire. Early medieval medicine has long been cast as a superstitious, degraded remnant of a vigorous, rational Greco-Roman tradition. Against such assumptions, Meg Leja argues that Carolingian scholars engaged in an active debate regarding the value of Hippocratic knowledge, a debate framed by the efforts to define Christian orthodoxy that were central to the reforms of Charlemagne and his successors.

From a subject with pagan origins that had suspicious links with magic, medical knowledge gradually came to be classified as a sacred art. This development coincided with an intensifying belief that body and soul, the two components of individual identity, cultivated virtue not by waging combat against one another but by working together harmoniously. The book demonstrates that new discussions regarding the legitimacy of medical learning and the merits of good health encouraged a style of self-governance that left an enduring mark on medieval conceptions of individual responsibility. The chapters tackle questions about the soul's material occupation of the body, the spiritual meaning of illness, and the difficulty of diagnosing the ills of the internal bodily cavity.

Combating the silence on "dark-age" medicine, Embodying the Soul uncovers new understandings of the physician, the popularity of preventative regimens, and the theological importance attached to dietary regulation and bloodletting. In presenting a cultural history of the body, the book considers a broad range of evidence: theological and pastoral treatises, monastic rules, court poetry, capitularies, hagiographies, biographies, and biblical exegesis. Most important, it offers a dynamic reinterpretation of the large numbers of medical manuscripts that survive from the ninth century but have rarely been the focus of historical study.

"Since the Covid-19 pandemic, there might be less inclination to ridicule medieval public health measures such as mask-wearing and lockdowns. Yet pre-modern medicine is still often discredited as primitive. As Embodying the Soul, Meg Leja’s momentous study of Carolingian medicine, attests, discoveries made in the Middle Ages helped lay the foundation for medical theory and practice today...This beautifully produced book is of a kind rare in an academic landscape of fast-paced research and employment. Leja makes a polished, compelling argument on a rich basis of medical, theological and philosophical texts, which will surely set the standard for the next decade."—Times Literary Supplement

"There is a great deal of evidence about Carolingian medicine, but because it doesn’t fit many of the standard narratives about the period, few scholars have paid it much attention. Meg Leja provides an impressive and thoughtful examination of the nature of the medical evidence and of the ways that it intersected with other forms of knowledge and practice—ensuring by the end that medicine is seen not just as a niche monastic antiquarian concern but as something that was relevant to the Carolingian world more broadly."—James T. Palmer, University of St. Andrews