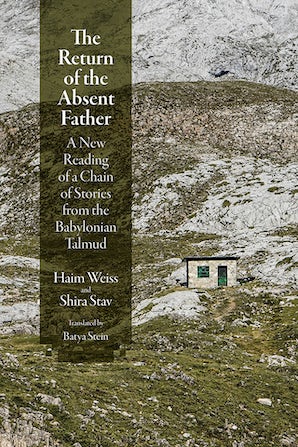 The Return of the Absent Father

The Return of the Absent Father offers a new reading of a chain of seven stories from tractate Ketubot in the Babylonian Talmud, in which sages abandon their homes, wives, and families and go away to the study house for long periods. Earlier interpretations have emphasized the tension between conjugal and scholarly desire as the key driving force in these stories. Haim Weiss and Shira Stav here reveal an additional layer of meaning to the father figure's role within the family structure. By shifting the spotlight from the couple to the drama of the father's relationship with his sons and daughters, they present a more complex tension between mundane domesticity and the sphere of spiritual learning represented by the study house.

This coauthored book presents a dialogic encounter between Weiss, a scholar of rabbinic literature, and Stav, a scholar of modern Hebrew literary studies. Working together, they have produced a book resonant in its melding of the scholarly norms of rabbinics with a literary interpretation based in feminist and psychoanalytic theory.

"[This book] shows just how much we have missed, and how valuable a fresh perspective on a seemingly well-trodden set of texts can be. . . . In its unassuming way, it urges us to reassess some of our most established habits when reading rabbinic literature, and to be much more courageous, methodologically and analytically, in reading Talmudic texts as literature."—Mira Balberg, in a review of the Hebrew edition