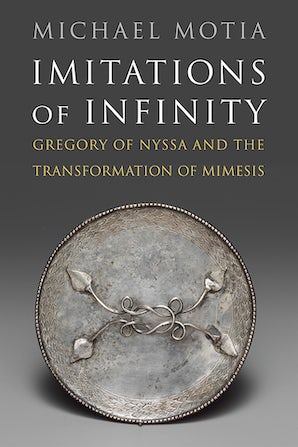 Gregory of Nyssa and the Transformation of Mimesis

by Michael A. Motia

We do not have many definitions of Christianity from late antiquity, but among the few extant is the brief statement of Gregory of Nyssa (335-395 CE) that it is "mimesis of the divine nature." The sentence is both a historical gem and theologically puzzling. Gregory was the first Christian to make the infinity of God central to his theological program, but how could he intend for humans to imitate the infinite? If the aim of the Christian life is "never to stop growing towards what is better and never to place any limit on perfection," how could mimesis function within this endless pursuit?

In Imitations of Infinity, Michael A. Motia situates Gregory among Platonist philosophers, rhetorical teachers, and early Christian leaders to demonstrate how much of late ancient life was governed by notions of imitation. Questions both intimate and immense, of education, childcare, or cosmology, all found form in a relationship of archetype and image. It is no wonder that these debates demanded the attention of people at every level of the Roman Empire, including the Christians looking to form new social habits and norms. Whatever else the late ancient transformation of the empire affected, it changed the names, spaces, and characters that filled the imagination and common sense of its citizens, and it changed how they thought of their imitations.

Like religion, imitation was a way to organize the world and a way to reach toward new possibilities, Motia argues, and two earlier conceptions of mimesis—one centering on ontological participation, the other on aesthetic representation—merged in late antiquity. As philosophers and religious leaders pondered how linking oneself to reality depended on practices of representation, their theoretical debates accompanied practical concerns about what kinds of objects would best guide practitioners toward the divine. Motia places Gregory within a broader landscape of figures who retheorized the role of mimesis in search of perfection. No longer was imitation a marker of inauthenticity or immaturity. Mimesis became a way of life.

"Michael Motia has convincingly proved that the transformative mimesis in Gregory is open-ended...Motia’s book can captivate readers across all humanities disciplines, in which mimesis—especially under the influence of continental philosophy and critical theory—stands among the key concepts."—Journal of Ancient Christianity

"This beautifully written, theoretically sophisticated, and wonderfully convincing book marries a lucid analysis of the usually inaccessible ontological mimesis of philosophy to the more intimate transformation of names, spaces, and characters that governed Christian imitation. The casual reader should not be intimidated; in revealing how mimetic relationships structure the world and stretch the Christian toward new possibilities, Michael Motia makes the transcendent approachable, the familiar divine, and Gregory of Nyssa profoundly relevant."—Candida Moss, University of Birmingham

"Michael A. Motia shows how Gregory of Nyssa joined the aesthetic and ontological approaches to mimesis in order to convey the paradox of a finite being imitating what is inimitable and infinite. One comes away from this book with the satisfaction of having learned something new about Gregory, but also with gratitude for being furnished with the tools to perceive the relevance of Motia's arguments regarding mimesis across a range of other texts from classical and late antiquity (and beyond)."—Alexis Torrance, University of Notre Dame