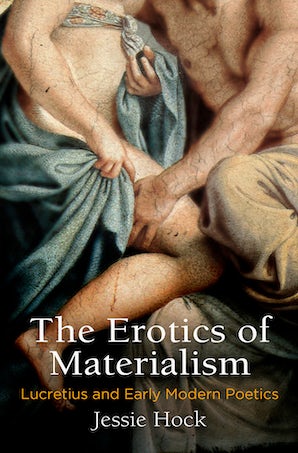 "This thoughtful, engagingly written book is a welcome addition to the ever-growing body of work that takes the postmedieval reception of Lucretius as its focus…[Hock] her book makes a strong and convincing case for reading poetry as a source not only of delight but transformative possibility."—L'Esprit Créateur

"Hock’s argument is tight and clean, and the book is clearly written; readers will come away more knowledgeable about Lucretius’s poetic influence in the early modern period...Erotics of Materialism is a highly compelling and informative read, and a welcome addition to the scholarly discussion of early modern 'dalliance' with the notorious Roman poet."—Seventeenth Century News

"What makes Hock’s book stand out is its commitment to reading Lucretius’s poetic afterlife in terms less of the notorious boost he gave materialist thought than of his contribution to the sixteenth- and seventeenth-century renewal of poetic forms. For as Hock elegantly demonstrates, scholars, in dwelling on the natural-philosophical content of Lucretian materialism, and thus on the bracing moral and cosmological challenge it put to the traditions of Platonized Christian orthodoxy, overlook how crucial Lucretius was for nonand even anti-Epicurean poets representing a wide range of ethical, social, and political attitudes...The Erotics of Materialism makes an original and important contribution to our understanding both of early modern European poetry and of its place in the broader assimilation of the materialist insights De rerum natura inspired."—Modern Language Quarterly

"[A] gripping and erudite account of the early modern reception of De rerum natura...The Erotics of Materialism is an important work. Hock traces how early modern French and English poets read Lucretius, certainly, but she also delivers a strong statement of purpose to reception studies, gauging the impact of De rerum natura in terms of experimentation and selective reading rather than as a matter of commitment or allegiance."—Modern Philology

"Where much of the scholarship on Lucretius and the early moderns examines his contributions to philosophy and science, Jessie Hock's brilliant book suggests powerful and far-reaching ways of engaging the specifically poetic aspects of Lucretian philosophy."—Elizabeth D. Harvey, University of Toronto