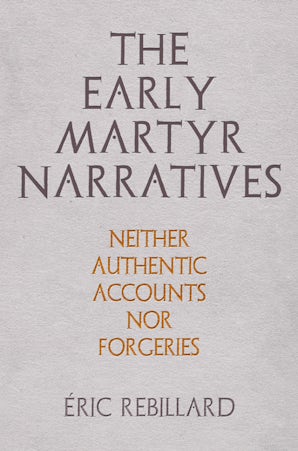 Neither Authentic Accounts nor Forgeries

From Eusebius of Caesarea, who first compiled a collection of martyr narratives around 300, to Thierry Ruinart, whose Acta primorum martyrum sincera et selecta was published in 1689, the selection and study of early hagiographic narratives has been founded on an assumption that there existed documents written at the time of martyrdom, or very close to it. As a result, a search for authenticity has been and continues to be central, even in the context of today's secular scholarship. But, as Éric Rebillard contends, the alternative approach, to set aside entirely the question of the historical reliability of martyr narratives, is not satisfactory either. Instead, he argues that martyr narratives should be consider as fluid "living texts," written anonymously and received by audiences not as precise historical reports but as versions of the story. In other words, the form these texts took, between fact and fiction, made it possible for audiences to readily accept the historicity of the martyr while at the same time not expect to hear or read a truthful account.

In The Early Martyr Narratives, Rebillard considers only accounts of Christian martyrs supposed to have been executed before 260, and only those whose existence is attested in sources that can be dated to before 300. The resulting small corpus contains no texts in the form of legal protocols, traditionally viewed as the earliest, most official and authentic records, nor does it include any that can be dated to a period during which persecution of Christians is known to have taken place. Rather than deduce from this that they are forgeries written for the sake of polemic or apologetic, Rebillard demonstrates how the literariness of the narratives creates a fictional complicity that challenges and complicates any claims of these narratives to be truthful.

"Rebillard has thoughtfully and effectively attempted to retranslate, redate, and reshape the way that we think about and use ‘authentic’ accounts of martyrdom in the telling of Christian history… Though brief, The Early Martyr Narratives leaves its reader with much to chew over and digest…[Rebillard’s] arguments have wide-reaching ramifications for text criticism and early Christian history and challenge us to rethink why and in what ways we talk about the past."—Journal of the American Academy of Religion

"A breakthrough work. Éric Rebillard is uniquely and eminently qualified to confront the problem of the dual legacy of the Protestant-Catholic polemics of the Reformation that focused on the 'genuine' status of the accounts of saints and martyrs on the one hand, and of the emerging concerns of 'scientific historiography' of the late eighteenth and nineteenth centuries on the other."—Brent Shaw, author of Sacred Violence: African Christians and Sectarian Hatred in the Age of Augustine

"At both the macro and micro level, in respect not only to broad literary questions but also to debates about the transmission and editing of individual texts, The Early Martyr Narratives makes significant contributions to our understanding of the real roles played by these accounts in the life of the Roman empire's Christian communities."—Dennis Trout, author of Damasus of Rome: The Epigraphic Poetry