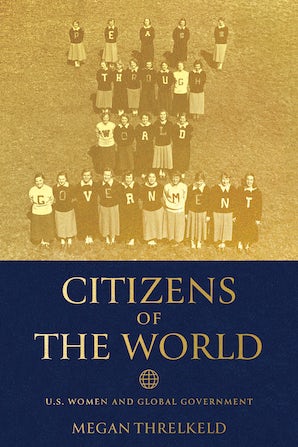 Citizens of the World

Between 1900 and 1950, many internationalist U.S. women referred to themselves as "citizens of the world." This book argues that the phrase was not simply a rhetorical flourish; it represented a demand to participate in shaping the global polity and an expression of women's obligation to work for peace and equality. The nine women profiled here invoked world citizenship as they promoted world government—a permanent machinery to end war, whether in the form of the League of Nations, the United Nations, or a full-fledged world federation.

These women agreed neither on the best form for such a government nor on the best means to achieve it, and they had different definitions of peace and different levels of commitment to genuine equality. But they all saw themselves as part of a global effort to end war that required their participation in the international body politic. Excluded from full national citizenship, they saw in the world polity opportunities for engagement and equality as well as for peace. Claiming world citizenship empowered them on the world stage. It gave them a language with which to advocate for international cooperation.

Citizens of the World not only provides a more complete understanding of the kind of world these women envisioned and the ways in which they claimed membership in the global community. It also draws attention to the ways in which they were excluded from international institution-building and to the critiques many of them leveled at those institutions. Women's arguments for world government and their practices of world citizenship represented an alternative reaction to the crises of the first half of the twentieth century, one predicated on cooperation and equality rather than competition and force.

"Citizens of the World is such a welcome addition to the exciting new work on women’s international thought and agency. Lucia Ames Mead, Fannie Fern Andrews, Rosika Schwimmer, Dorothy Kenyon, Edith Wynner—these are all among the many women whose names should count for more in international history. The fact that they are all Americans only underscores Megan Threlkeld’s message: American involvement and support for internationalist projects has a long history through the first half of twentieth century, and we need to know more!"—Glenda Sluga, University of Sydney

"In Megan Threlkeld's skillful hands, women who previously have been remembered, if at all, as anecdotes in separate stories—of suffrage, pacifism, and reform—emerge as a community of creative thinkers, analysts, and activists. Histories of twentieth-century political thought now need to be rewritten. Our understanding of American women's international activism is greatly enriched by Citizens of the World."—Linda Kerber, University of Iowa