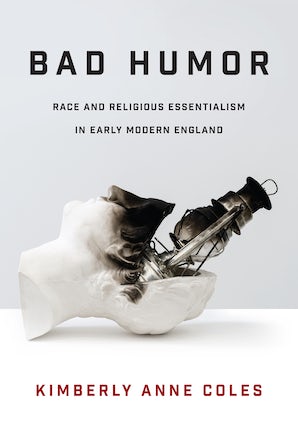 Race, in the early modern period, is a concept at the crossroads of a set of overlapping concerns of lineage, religion, and nation. In Bad Humor, Kimberly Anne Coles charts how these concerns converged around a pseudoscientific system that confirmed the absolute difference between Protestants and Catholics, guaranteed the noble quality of English blood, and justified English colonial domination.

Coles delineates the process whereby religious error, first resident in the body, becomes marked on the skin. Early modern medical theory bound together psyche and soma in mutual influence. By the end of the sixteenth century, there is a general acceptance that the soul's condition, as a consequence of religious belief or its absence, could be manifest in the humoral disposition of the physical body. The history that this book unfolds describes developments in natural philosophy in the early part of the sixteenth century that force a subsequent reconsideration of the interactions of body and soul and that bring medical theory and theological discourse into close, even inextricable, contact. With particular consideration to how these ideas are reflected in texts by Elizabeth Cary, John Donne, Ben Jonson, William Shakespeare, Edmund Spenser, Mary Wroth, and others, Coles reveals how science and religion meet nascent capitalism and colonial endeavor to create a taxonomy of Christians in Black and White.

"Locating religion and race along a single axis, Kimberly Anne Coles measures the role of the connection between body and soul in the oppression and alienation of groups of people. Her argument gets at the foundations of race-making in a book that is thoroughly grounded in literary criticism, early modern race studies, religious history, early modern medical theory, and early American law."—Jonathan Burton, Whittier College