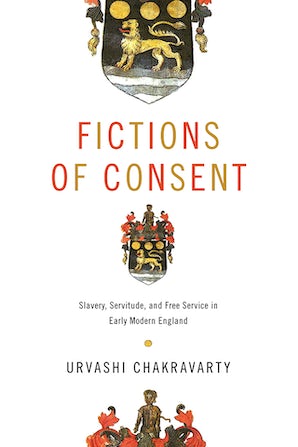 In Fictions of Consent Urvashi Chakravarty excavates the ideologies of slavery that took root in early modern England in the period that preceded the development of an organized trade in enslaved persons.

Despite the persistent fiction that England was innocent of racialized slavery, Chakravarty argues that we must hold early modern England—and its narratives of exceptional and essential freedom—to account for the frameworks of slavery that it paradoxically but strategically engendered. Slavery was not a foreign or faraway phenomenon, she demonstrates; rather, the ideologies of slavery were seeded in the quotidian spaces of English life and in the everyday contexts of England's service society, from the family to the household, in the theater and, especially, the grammar school classroom, where the legacies of classical slavery and race were inherited and negotiated. The English conscripted the Roman freedman's figurative "stain of slavery" to register an immutable sign of bondage and to secure slavery to epidermal difference, even as early modern frameworks of "volitional service" provided the strategies for later fictions of "happy slavery" in the Atlantic world. Early modern texts presage the heritability of slavery in early America, reveal the embeddedness of slavery within the family, and illuminate the ways in which bloodlines of descent underwrite the racialized futures of enslavement.

Fictions of Consent intervenes in a number of areas including early modern literary and cultural studies, premodern critical race studies, the reception of classical antiquity, and the histories of law, education, and labor to uncover the conceptual genealogies of slavery and servitude and to reveal the everyday sites where the foundations of racialized slavery were laid. Although early modern England claimed to have "too pure an Air for Slaves to breathe in," Chakravarty reveals slavery was a quintessentially English phenomenon.

"The book makes a definitive statement within early modern studies that will also be valuable to those who work on classical reception, the later Middle Ages, and hemispheric early American studies, to scholars interested in the persistence of the feudal and those interested in the emergence of Atlantic capitalism. Its economic, social, and political range is tremendous; its theoretical apparatus sophisticated but unobtrusive—due, in part, to the precise language employed in her thorough development of the central claim. From undergraduates to advanced researchers, Fictions of Consent will provide much to consider and debate for years to come. Chakravarty has both solidified the early promise of early modern critical race studies and opened the door for a newly invigorated dialogue with early American studies, Black studies, and queer studies, to mention but a few pertinent fields."—Modern Philology

"Early modern political polemics often relied on the trope of England as a nation of free persons, intolerant of slavery on its home island; but in what ways did English culture and society contradict this national self-image? And how might those structures, submerged under rhetoric of freedom, have contributed to the evolution of racialized human tra8cking and transatlantic slavery? Urvashi Chakravarty probes these questions in Fictions of Consent—a monograph that rewards the reader with essential concepts, unexpected evidence, and thought provoking analysis."—Seventeenth Century News

"Urvashi Chakravarty’s Fictions of Consent is an ambitious book that should be used as a key reference point for any future study of slavery and servitude in early modern English fiction. As stimulating as it is wide-ranging in its topical scope, this book is sure to benefit a multitude of scholars with interest in the literary history of labour and service."—The Seventeenth Century

"In this timely and persuasive book, Urvashi Chakravarty traces the classical Roman origins for the conceptual and rhetorical contours of the transatlantic slave trade by paying attention to the inflections that were given to ancient rituals, vocabulary, and literary texts in early modern England and passed on to the New world from the first moments of imperial expansion. Like the sixteenth-century humanists examined in its pages, in other words, Fictions of Consent leans back to lean forward."—Lynn Enterline, Vanderbilt University

"Urvashi Chakravarty brilliantly crafts a project that boasts historical, textual detail – indeed, her project betrays a dazzling and fastidious attention to sources – while also making crucial theoretical interventions into some of the most important issues in the field: servitude, slavery, racialization, and the law. She is the rare critic who sees, and can analyze, both the forest and the trees."—Rebecca Lemon, University of Southern California

"Fictions of Consent is a tour de force that effectively debunks many older chestnuts about England’s lack of knowledge about, and engagement with, slavery and forced labor. Urvashi Chakravarty systematically demonstrates how actively engaged the early modern English society was with both notions and practices of slavery. Moreover, she has an expert’s attentiveness to archival materials, discovering both new materials and reading older ones in new and illuminating ways. Fictions of Consent is a vital piece of early modern scholarship."—Ayanna Thompson, Arizona State University