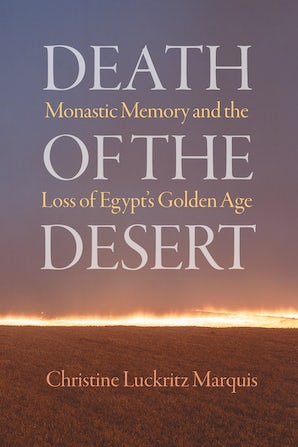 Death of the Desert

Monastic Memory and the Loss of Egypt's Golden Age

In the late fourth century, the world of Christianity was torn apart by debate over the teachings of the third-century theologian Origen and his positions on the incorporeality of God. In the year 400, Archbishop Theophilus of Alexandria convened a council declaring Origen's later followers as heretics. Shortly thereafter, Theophilus banished the so-called Tall Brothers, four Origenist monks who led monastic communities in the western Egyptian desert, along with hundreds of their brethren. In some accounts, Theophilus leads a violent group of drunken youths and enslaved Ethiopians in sacking and desecrating the monastery; in others, he justly exercises his episcopal duties. In some versions, Theophilus' violent actions effectively bring the Golden Age of desert monasticism to an end; in others, he has shown proper respect for the desert fathers, whose life of asceticism is subsequently destroyed by bands of barbarian marauders. For some, the desert came to be inextricably connected to violence and trauma, while for others, it became a site of nostalgic recollection.

Which of these narratives subsequent generations believed depended in good part on the sources they were reading. In Death of the Desert, Christine Luckritz Marquis offers a fresh examination of this critical juncture in Christian history and brings into dialogue narrative strands that have largely been separated in the scholarly tradition. She takes the violence perpetrated by Theophilus as a turning point for desert monasticism and considers how monks became involved in acts of violence and how that violence came back to haunt them. More broadly, her careful attention to the dynamic relations between memory practices, the rhetorical constructions of place, racialized discourse, and language and deeds of violence speak to us in our own time.