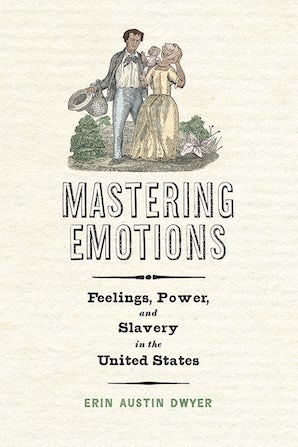 Feelings, Power, and Slavery in the United States

The daily interactions that occurred between slaveholders and enslaved people around emotions, in conjunction with larger debates about race and freedom, form the backbone of what Erin Austin Dwyer calls the emotional politics of slavery. Race and status determined which emotions were permissible or punishable, which should be restrained, and by whom. As a result, mastering emotions, one's ability to control one's own feelings and those of others, was paramount for slaveholders and enslaved. The emotional politics of slavery were thus fashioned by enslaved people and slaveholders together through the crucible of slavery.

Emancipation was a seismic shift in the affective landscape of the antebellum South. Though the end of the Civil War rendered moot the debate over how to emotionally maintain slavery, the lingering conflict over whether the emotional strictures governing the South would be based on race or free status had serious repercussions, particularly for free Black people. The postwar rise of legal and extralegal attempts to affectively control free Black people underscored the commitment of elite White Southerners to preserving the power dynamics of the emotional politics of slavery, by any means necessary. Mastering Emotions concludes by detailing how the long-term legacy of those emotional politics reverberated through Reconstruction and the Jim Crow eras.

Introduction. The Emotional Politics of Slavery
Chapter 1. "To Change Their Sentiments"
Chapter 2. "Born and Reared in Slavery"
Chapter 3. "The Pursuit of Happiness"
Chapter 4. "Breach of Confidence"
Chapter 5. "Fear No Lash, nor Worse"
Chapter 6. "Enjoying Freedom"
Epilogue. "The Sentiment Left by Slavery Is Still with Us"
Notes
Selected Bibliography
Index
Acknowledgments

"Within this study, Dwyer argues persuasively that for both slaveholders and the enslaved, emotion was used as a crucial tool of power and thus mastering one’s emotions, as the title suggests, was integral to navigating daily life under slavery...By emphasizing the central role that emotion played in the maintenance of and resistance to slavery, Dwyer is doing the vital work of urging us to recognize the pervasive role emotion--an often overlooked social and political force--continues to play in upholding racist power structures in today’s society."—American Nineteenth Century History

""Essential...Dwyer’s thoroughly documented study demonstrates that white southerners often dismissed the emotional capacity of Black people, especially when it came to separating enslaved families by sale...One of the many virtues of this volume is that Dwyer carries her story beyond emancipation into the Jim Crow era."—Choice