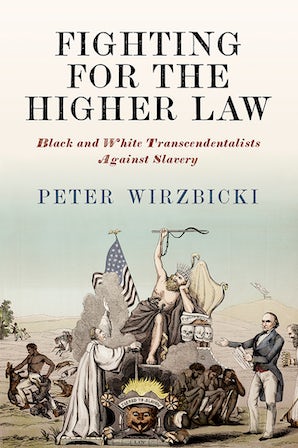 Fighting for the Higher Law

Black and White Transcendentalists Against Slavery

In Fighting for the Higher Law, Peter Wirzbicki explores how important black abolitionists joined famous Transcendentalists to create a political philosophy that fired the radical struggle against American slavery.

In the cauldron of the antislavery movement, antislavery activists, such as William C. Nell, Thomas Sidney, and Charlotte Forten, and Transcendentalist intellectuals, including Ralph Waldo Emerson and Henry David Thoreau, developed a "Higher Law" ethos, a unique set of romantic political sensibilities—marked by moral enthusiasms, democratic idealism, and a vision of the self that could judge political questions from "higher" standards of morality and reason. The Transcendentalism that emerges here is not simply the dreamy philosophy of privileged white New Englanders, but a more populist movement, one that encouraged an uncompromising form of politics among a wide range of Northerners, black as well as white, working-class as well as wealthy. Invented to fight slavery, it would influence later labor, feminist, civil rights, and environmentalist activism.

"The effort to correct a whitewashed understanding of American Transcendentalism takes a giant step forward with Fighting for the Higher Law. Peter Wirzbicki has gifted us a richly detailed and revelatory study that restores Black thinkers and antislavery networks to Transcendentalism…The book offers us a new vision of the American crowd and celebrates within it each and all who kept with perfect sweetness the commitment to equality."—American Literary History

"[A]n important contribution to the history of both Transcendentalism and radical abolitionism, as well as to intellectual history as a discipline...[I]t expertly describes intellectual and political life as the converging point of different forces and currents produced by a diverse cast of characters and sites and that is not centered exclusively on white male canonical authors or institutions, without flattening the intricacies and sometimes deadlocks of movements built across gender, race, and class lines."—Journal of Southern History

"In these pages, with an eloquence worthy of William Cooper Nell and Ralph Waldo Emerson, Peter Wirzbicki urges us to hear the hidden harmonies between abolitionist and Transcendentalist thought, while never failing to notice the dissonances, too. This is an inspiring book that ranges as widely as the thinkers it follows. It demonstrates anew why intellectuals and the life of the mind mattered in the struggle to end slavery."—Caleb McDaniel, Pulitzer Prize-winning author of Sweet Taste of Liberty: A True Story of Slavery and Restitution in America

"Peter Wirzbicki brilliantly rescues Transcendental abolitionists from the caricatures and myths that surround their history. Perhaps the most original contribution he makes is to foreground the forgotten intellectual and political contributions of African American Transcendentalists. This astute book will forever change the way we think about Transcendentalism and foreground its antislavery contributions to the American radical democratic imagination."—Manisha Sinha, author of The Slave's Cause: A History of Abolition