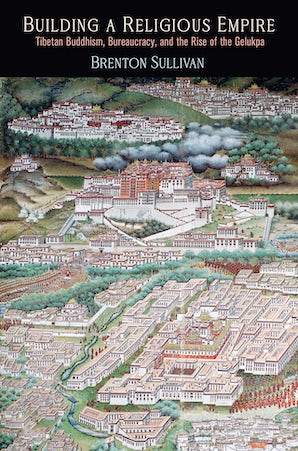 Tibetan Buddhism, Bureaucracy, and the Rise of the Gelukpa

The vast majority of monasteries in Tibet and nearly all of the monasteries in Mongolia belong to the Geluk school of Tibetan Buddhism, best known through its symbolic head, the Dalai Lama. Historically, these monasteries were some of the largest in the world, and even today some Geluk monasteries house thousands of monks, both in Tibet and in exile in India. In Building a Religious Empire, Brenton Sullivan examines the school's expansion and consolidation of power along the frontier with China and Mongolia from the mid-seventeenth through the mid-eighteenth centuries to chart how its rise to dominance took shape.

In contrast to the practice in other schools of Tibetan Buddhism, Geluk lamas devoted an extraordinary amount of effort to establishing the institutional frameworks within which everyday aspects of monastic life, such as philosophizing, meditating, or conducting rituals, took place. In doing so, the lamas drew on administrative techniques usually associated with state-making—standardization, record-keeping, the conscription of young males, and the concentration of manpower in central cores, among others—thereby earning the moniker "lama official," or "Buddhist bureaucrat."

The deployment of these bureaucratic techniques to extend the Geluk "liberating umbrella" over increasing numbers of lands and peoples leads Sullivan to describe the result of this Geluk project as a "religious empire." The Geluk lamas' privileging of the monastic institution, Sullivan argues, fostered a common religious identity that insulated it from factionalism and provided legitimacy to the Geluk project of conversion, conquest, and expansion. Ultimately, this system succeeded in establishing a relatively uniform and resilient network of thousands of monasteries stretching from Nepal to Lake Baikal, from Beijing to the Caspian Sea.

A Note on Language and Romanization

Introduction
Chapter 1. The Geluk School's Innovative Use of Monastic Constitutions
Chapter 2. Administering a Monastery for the "Common Good"
Chapter 3. Institutionalizing Tantra
Chapter 4. The Systematization of Doctrine and Education
Chapter 5. Singing Together in One Voice
Conclusion

"While this book is a must-read for anyone interested in Tibetan Buddhism and Buddhist monasticism, this is also a volume that offers rewarding insights into how religious organizations function and succeed in general and thus could be of interest to scholars studying other religious empires and traditions."—Religious Studies Review

"This work is a good start in mapping the institutional changes and constants of Gelukpa monasteries in Tibetan Buddhist regions...[T]his book is worth both reading and engaging with for its close engagements with a topic that deserves attention."—Journal of the American Academy of Religion

"A remarkable and virtually unprecedented achievement in Tibetan studies, Building a Religious Empire is an original and substantial contribution to our understanding of Tibetan Buddhist monasteries and the role they played in East Asian history."—Gray Tuttle, Columbia University