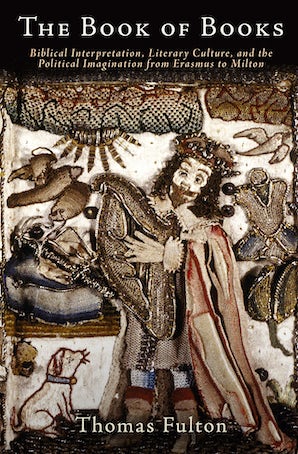 The Book of Books

Biblical Interpretation, Literary Culture, and the Political Imagination from Erasmus to Milton

Just as the Reformation was a movement of intertwined theological and political aims, many individual authors of the time shifted back and forth between biblical interpretation and political writing. Two foundational figures in the history of the Renaissance Bible, Desiderius Erasmus and William Tyndale, are cases in point, one writing in Latin, the other in the vernacular. Erasmus undertook the project of retranslating and annotating the New Testament at the same time that he developed rhetorical approaches for addressing princes in his Education of a Christian Prince (1516); Tyndale was occupied with biblically inflected works such as his Obedience of a Christian Man (1528) while translating and annotating the first printed English Bibles.

In The Book of Books, Thomas Fulton charts the process of recovery, interpretation, and reuse of scripture in early modern England, exploring the uses of the Bible as a supremely authoritative text that was continually transformed for political purposes. In a series of case studies linked to biblical translation, polemical tracts, and works of imaginative literature produced during the reigns of successive English rulers, he investigates the commerce between biblical interpretation, readership, and literary culture. Whereas scholars have often drawn exclusively on modern editions of the King James Version, Fulton turns our attention toward the specific Bibles that writers used and the specific manner in which they used them. In doing so, he argues that Spenser, Shakespeare, Milton, and others were in conversation not just with the biblical text itself, but with the rich interpretive and paratextual structures that accompanied it, revolving around sites of social controversy as well as the larger, often dynastically oriented conditions under which particular Bibles were created.

"Essential...Fulton’s Book of Books traces early modern biblical translations from Erasmus and Tyndale through the King James version, looking at both the texts and their accompanying glosses and annotations...[A] most impressive achievement and a valuable resource for those studying early modern history, religion, or literature.""—Choice

Thomas Fulton’s latest monograph provides a rich selection of insights into the interpretation
of the early modern Bible...Steeped in historical, theological, and literary contexts, the book has much to
offer the newly invigorated field of early modern biblical scholarship...This will no doubt prove an important work in understanding the impact and uses of early modern bibles, as well as bridging gaps between historical, theological, and literary approaches to its study.

"[A] rich and important study...Fulton’s book should stand for generations as a work of deep, lasting value for scholars across a multitude of disciplines in early modern studies."—Modern Philology

"Fulton's magisterial study shows the complex and reciprocal ways in which the English Bible informed the early modern political imagination. Challenging long-held assumptions about early translations, Fulton moves from Erasmus to Tyndale to the Geneva Bible, before offering a series of dazzling new insights on how biblical reading shaped literary form and meaning for Spenser, Shakespeare, and Milton. The Book of Books is a model of thorough and superb scholarship in every respect."—Laura L. Knoppers, University of Notre Dame

"The Book of Books explains in refreshing detail how early Protestant readers of the English Bible praised its 'literal' sense, but applied the scripture in all kinds of non-literal ways to justify their political ideas. Thomas Fulton shows how early modern authors from Tyndale to Milton drew creative inspiration from the dynamic interplay between the texts of early printed Bibles and their printed glosses. His findings constitute a tour de force in the study of early modern biblical and literary culture."—Mark Rankin, James Madison University

"This is an impressive and important book on a topic that continues to generate interest from a variety of directions-literary and political history, the history of the Bible-as-book, Reformation studies and the history of religion. In moving between the big picture and insightful case studies, Thomas Fulton demonstrates the fervor and political stakes around biblical interpretation in the Reformation and the century and a half following, moving from the more specifically theological arena into a wider literary and cultural field."—Kevin Killeen, author of The Political Bible in Early Modern England