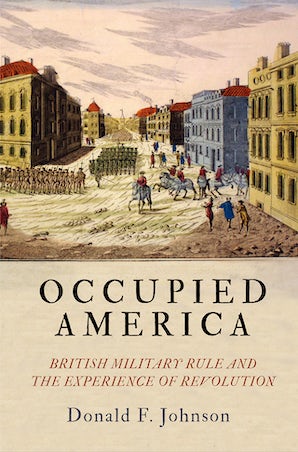 British Military Rule and the Experience of Revolution

In Occupied America, Donald F. Johnson chronicles the everyday experience of ordinary people living under military occupation during the American Revolution. Focusing on day-to-day life in port cities held by the British Army, Johnson recounts how men and women from a variety of backgrounds navigated harsh conditions, mitigated threats to their families and livelihoods, took advantage of new opportunities, and balanced precariously between revolutionary and royal attempts to secure their allegiance.

Between 1775 and 1783, every large port city along the Eastern seaboard fell under British rule at one time or another. As centers of population and commerce, these cities—Boston, New York, Newport, Philadelphia, Savannah, Charleston—should have been bastions from which the empire could restore order and inspire loyalty. Military rule's exceptional social atmosphere initially did provide opportunities for many people—especially women and the enslaved, but also free men both rich and poor—to reinvent their lives, and while these opportunities came with risks, the hope of social betterment inspired thousands to embrace military rule. Nevertheless, as Johnson demonstrates, occupation failed to bring about a restoration of imperial authority, as harsh material circumstances forced even the most loyal subjects to turn to illicit means to feed and shelter themselves, while many maintained ties to rebel camps for the same reasons. As occupations dragged on, most residents no longer viewed restored royal rule as a viable option.

As Johnson argues, the experiences of these citizens reveal that the process of political change during the Revolution occurred not in a single instant but gradually, over the course of years of hardship under military rule that forced Americans to grapple with their allegiance in intensely personal and highly contingent ways. Thus, according to Johnson, the quotidian experience of military occupation directly affected the outcome of the American Revolution.

Introduction. The Experience of Occupation

"As Johnson demonstrates, war is almost always more complex than we remember it . . . [C]ontemporary scholars are doing a good job of illuminating the forgotten intricacies of nationality, ideology, race and gender in wartime."—The New York Times

"Donald F. Johnson offers a worthy contribution to the renewed interest in the social history of the American Revolution as an experience lived by soldiers and civilians alike…Occupied America is chock-full of fascinating tales of survival that bring to life the mix of miseries, complexities, and cruelties of wartime that will resonate with anyone interested in military occupation from any period or place."—The Journal of Southern History

"This excellent examination of a little-known aspect of the Revolution is a mustread for all people interested in the Revolution and makes an important contribution to the historiography of our nation’s founding."—New York History

"Eighteenth-century cities were exciting places, and the drama only increased when British soldiers and sailors arrived in force. Donald F. Johnson is the first historian to take a broad view of the occupied cities of the American Revolution and uncover their surprises. Original, attractive, and full of rich portraits of life under British occupation, Johnson has produced an essential book."—Benjamin Carp, author of Defiance of the Patriots: The Boston Tea Party and the Making of America

"Donald F. Johnson's Occupied America is a deeply researched, well-argued, thoughtful, and engaging piece of work. Johnson goes well beyond existing scholarship in his analysis, and his core argument-that the occupation experience 'caused the king's cause to rot from the inside out'-is effectively developed and persuasive."—Eric Hinderaker, author of Boston's Massacre