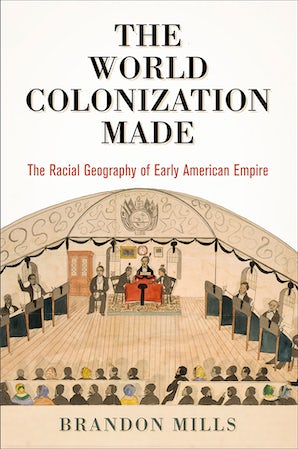 The World Colonization Made

According to accepted historical wisdom, the goal of the African Colonization Society (ACS), founded in 1816 to return freed slaves to Africa, was borne of desperation and illustrated just how intractable the problems of race and slavery had become in the nineteenth-century United States. But for Brandon Mills, the ACS was part of a much wider pattern of national and international expansion. Similar efforts on the part of the young nation to create, in Thomas Jefferson's words, an "empire of liberty," spanned Native removal, the annexation of Texas and California, filibustering campaigns in Latin America, and American missionary efforts in Hawaii, as well as the founding of Liberia in 1821. Mills contends that these diverse currents of U.S. expansionism were ideologically linked and together comprised a capacious colonization movement that both reflected and shaped a wide range of debates over race, settlement, citizenship, and empire in the early republic.

The World Colonization Made chronicles the rise and fall of the colonization movement as a political force within the United States—from its roots in the crises of the Revolutionary era, to its peak with the creation of the ACS, to its ultimate decline with emancipation and the Civil War. The book interrogates broader issues of U.S. expansion, including the progression of federal Indian policy, the foundations and effects of the Monroe Doctrine and Manifest Destiny, and the growth of U.S. commercial and military power throughout the Western hemisphere. By contextualizing the colonization movement in this way, Mills shows how it enabled Americans to envision a world of self-governing republics that harmonized with racial politics at home.

"Brandon Mills deftly compares U.S. colonization in Africa with British efforts in Sierra Leone and, even more impressively, with Indian removal efforts at home. He provides not only a comprehensive history of Liberian colonization but also an exemplary account of the efforts to colonize black people in Africa and the Americas between the founding of the nation and the end of the Civil War."—Amy Greenberg, Penn State University

"Expanding both the geographical and chronological framework for understanding the history of colonization, Brandon Mills convincingly argues that the colonization movement was an expression of U.S. attempts to manage domestic racial issues by creating racially-defined republics elsewhere. In his expert telling, colonization not only justified the idea of the United States as a white republic but also linked expansion to global empire building."—Emily Conroy-Krutz, Michigan State University