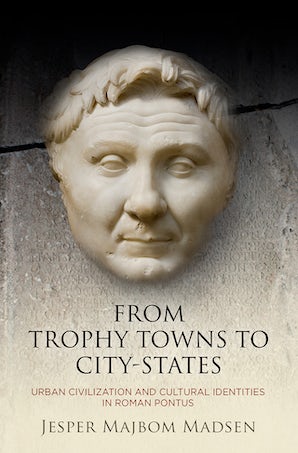 From Trophy Towns to City-States

In 66 BCE, in the woods of Armenia Minor, Pompey the Great defeated Mithridates VI Eupator, making him one of the most successful Roman generals of all time. The victory presented him with the enormous challenge of organizing not only Mithridates' kingdom but also large parts of Anatolia and the Near East that were now placed under Roman rule. Pompey's solution was to found six new cities and to convert two existing communities, Zela, a temple community dedicated to the goddess Anaïtis, and Amaseia, the former royal residence, into cities as well. There would now be eight city-states, each with the responsibility of administering the territory known to the Romans as Pontus.

It has often been argued that in their eastern provinces the Romans based newly founded cities on the model of the Greek city-state and that Roman culture had less influence there than in the West. Jesper Majbom Madsen, however, describes civic development in Roman Pontus as a process by which Roman and Greek elements were introduced simultaneously. He contends that the Pompeian cities were neither traditional Greek poleis nor entirely Roman settlements with Roman laws and legislation; nor were they Greek cities gradually influenced by Roman rule. Instead, they represented a third category, in which a citizen could be an Anatolian, Greek, and Roman at the same time as well as a member of the elite, a priest in the imperial cult and in a cult to Asclepius, a local politician and a member of the Pontic koinon, all without contradiction.

Bringing together a wide range of literary, historical, and political sources, From Trophy Towns to City-States examines how Pompey's cities were initially organized, how they developed over time, and how inhabitants in this part of the Roman Empire defined themselves culturally and politically.