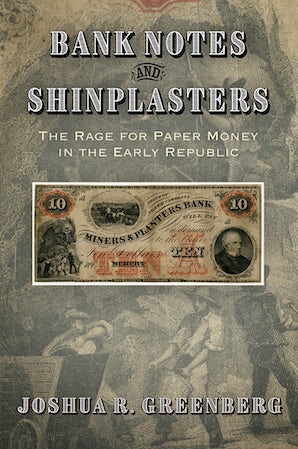 The Rage for Paper Money in the Early Republic

The colorful history of paper money before the Civil War

Before Civil War greenbacks and a national bank network established a uniform federal currency in the United States, the proliferation of loosely regulated banks saturated the early American republic with upwards of 10,000 unique and legal bank notes. This number does not even include the plethora of counterfeit bills and the countless shinplasters of questionable legality issued by unregulated merchants, firms, and municipalities. Adding to the chaos was the idiosyncratic method for negotiating their value, an often manipulative face-to-face discussion consciously separated from any haggling over the price of the work, goods, or services for sale. In Bank Notes and Shinplasters, Joshua R. Greenberg shows how ordinary Americans accumulated and wielded the financial knowledge required to navigate interpersonal bank note transactions.

Locating evidence of Americans grappling with their money in fiction, correspondence, newspapers, printed ephemera, government documents, legal cases, and even on the money itself, Greenberg argues Americans, by necessity, developed the ability to analyze the value of paper financial instruments, assess the strength of banking institutions, and even track legislative changes that might alter the rules of currency circulation. In his examination of the doodles, calculations, political screeds, and commercial stamps that ended up on bank bills, he connects the material culture of cash to financial, political, and intellectual history.

The book demonstrates that the shift from state-regulated banks and private shinplaster producers to federally authorized paper money in the Civil War era led to the erasure of the skill, knowledge, and lived experience with banking that informed debates over economic policy. The end result, Greenberg writes, has been a diminished public understanding of how currency and the financial sector operate in our contemporary era, from the 2008 recession to the rise of Bitcoin.

Introduction. From Madison to Monroe

"With startling insight and ingenuity, Joshua Greenberg’s Bank Notes and Shinplasters explores Americans’ fixation on the features that distinguished one bill from another amid the mishmash of money issued by banks and businesses before the Civil War…Greenberg and other historians’ designation of the Civil War as the great divide in American monetary history downplays banks’ continuing command of the money supply in the postwar period, particularly as checks and drafts on deposits took the place of cash in many transactions. Few studies, however, have devoted such deeply illuminating consideration to bank notes as literary, artistic, and material artifacts of the early United States."—Journal of Early American History

"In Bank Notes and Shinplasters, Joshua Greenberg investigates early Americans’ day-to-day experience with bank notes and makes the persuasive case that they were better financially educated than we are today…Greenberg’s study comes alive as he shows how early Americans navigated the material, cultural, and political world of paper money in the years of the early republic and learned the important lesson of the difference between a reputable bank note that retained its face value, an uncurrent bill that might trade at a discount, and shinplaster issued by a disreputable local business…Greenberg’s timely and important book advances previous studies of early and nineteenth-century American economy and finance in its attention to the textual, visual, and material culture of banking and paper money."—American Nineteenth Century Historry

"Prior to the Civil War, thousands of different, ornately engraved bank notes supplied most of the money in circulation. In marvelous detail, Joshua R. Greenberg takes us back to the anxieties of that era. He deftly examines how every single cash transaction was shot through with uncertainty and arbitrage, as ordinary citizens struggled with the perils of counterfeit notes, fluctuating exchange rates, and worthless paper. In his revealing reconstruction of a monetary world long lost to us, Greenberg ultimately explains how these mundane exchanges shaped the seismic political events of the day, from the Bank War to the Civil War. A splendid book."—Stephen Mihm, author of A Nation of Counterfeiters

"Joshua R. Greenberg skillfully provides a history of how everyone in the early American republic pushed, pondered, purloined, politicized, and polemicized the thousands of material objects that circulated as their money. Historiographically significant and beautifully written, Bank Notes and Shinplasters will be of interest to anyone interested in the history of capitalism."—Jessica Lepler, author of The Many Panics of 1837: People, Politics, and the Creation of a Transatlantic Financial Crisis

"In this persuasive and entertaining book, Joshua R. Greenberg shows that early republic Americans had their mind on their money and their money on their mind. They put bank notes-valuable and counterfeit, pristine and soiled-to mundane and surprising commercial, cultural, and political uses. Greenberg traces the circulation of these bills as material objects from bank vaults, to store tills, to consumers' pockets and back again. In so doing, he makes compelling use of them himself to register the contested economic and emotional meanings that these ubiquitous instruments had for Americans who held and passed them. I love this book."—Brian Luskey, author of On the Make: Clerks and the Quest for Capital in Nineteenth-Century America