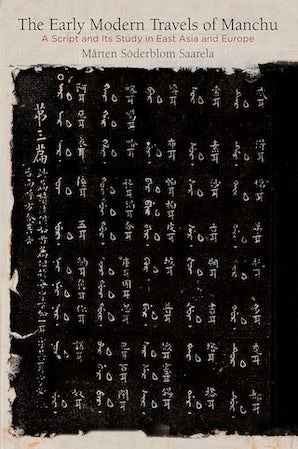 The Early Modern Travels of Manchu

A Script and Its Study in East Asia and Europe

Manchu was a language first written down as part of the Qing state-building project in Northeast Asia in the early seventeenth century. After the Qing invasion of China in 1644, and for the next two and a half centuries, Manchu was the language of state in one of the early modern world's great powers. Its prominence and novelty attracted the interest of not only Chinese literati but also foreign scholars. Yet scholars in Europe and Japan, and occasionally even within China itself, were compelled to study the language without access to a native speaker. Jesuit missionaries in Beijing sent Chinese books on Manchu to Europe, where scholars struggled to represent it in an alphabet compatible with Western pedagogy and printing technology. In southern China, meanwhile, an isolated phonologist with access to Jesuit books relied on expositions of the Roman alphabet to make sense of the Manchu script. When Chinese textbooks and dictionaries of Manchu eventually reached Japan, scholars there used their knowledge of Dutch to understand Manchu.

In The Early Modern Travels of Manchu, Mårten Söderblom Saarela focuses on outsiders both within and beyond the Qing empire who had little interaction with Manchu speakers but took an interest in the strange, new language of a rising world power. He shows how—through observation, inference, and reference to received ideas on language and writing—intellectuals in southern China, Russia, France, Chosŏn Korea, and Tokugawa Japan deciphered the Manchu script and explores the uses to which it was put for recording sounds and arranging words.

Introduction. A Cultural History of the Manchu Script
Chapter 1. To Follow Fuxi or Kubilai Khan? Written Manchu Before 1644
Chapter 2. The Beijing Origins of Manchu-Language Pedagogy, 1668-1730
Chapter 3. Phonology and Manchu in Southern China and Japan, c. 1670-1716
Chapter 4. Manchu Words and AlphabeticalOrder in China and Japan, 1683-1820s
Chapter 5. Leibniz's Dream of a Manchu Encyclopedia and Kangxi's Mirror, 1673-1708
Chapter 6. The Manchu Script and Foreign Sounds from the Qing Court to Korea, 1720s-1770s
Chapter 7. The Invention of a Manchu Alphabet in Saint Petersburg, 1720s-1730s
Chapter 8. The Making of a Manchu Typeface in Paris, 1780s-1810s
Conclusion

The Early Modern Travels of Manchu is a prime example of how to successfully conjoin the microhistorical with the global...The narrative plumbs into the social lives of the Manchu script, unfolding the reverberations of individual agencies, while keeping the readers updated of broader temporal and spatial movements. Needless to say, the book will not only inspire historians of global microhistory. Those of cultural mobility and early modernity, and not least, scholars of Manchu studies, will equally be engrossed.

"Ranging widely across China, Korea, Japan, Russia, and western Europe, from the seventeenth to the end of the eighteenth century, The Early Modern Travels of Manchu demonstrates convincingly that a form of global philology connected the early modern world."—Peter C. Perdue, Yale University