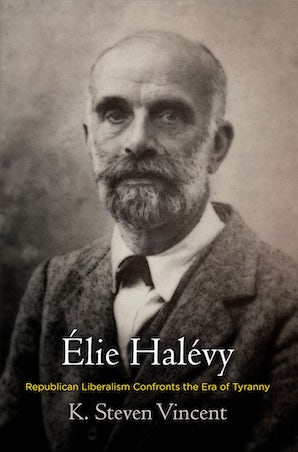 Élie Halévy (1870-1937) was one of the most respected and influential intellectuals of the French Third Republic. In this densely contextualized biography, K. Steven Vincent describes how Halévy, best remembered as the historian of British Utilitarianism and nineteenth-century English history, was also a persistent, acute, and increasingly anxious observer of society in a period defined by industrialization and imperialism and by what Halévy famously called the "era of tyrannies."

Vincent distinguishes three broad phases in the development of Halévy's thought. In the first, Halévy brought his version of neo-Kantianism to debates with sociologists and philosophers and to his study of English Utilitarianism. He forged ties with Xavier Léon, Léon Brunschvicg, and Alain (Émile-Auguste Chartier), life-long intellectual interlocutors. Together they founded the Revue de métaphysique et de morale, a continuing venue for Halévy's reflections. The Dreyfus Affair, Vincent argues, caused Halévy to shift his focus from philosophy to history and from metaphysics to politics. He became a philosopher-historian, less interested in abstract neo-Kantianism and more in real-world action, less given to rarified debates over truth and more to investigation of how theories and their applications were situated within broader political, economic, and cultural movements. World War I and its destabilizing effects provoked the third phase, Vincent explains. As he watched reason recede before rabid nationalism and a pox of political enthusiasms, Halévy sounded the alarm about liberal democracy's vulnerabilities.

Vincent situates Halévy on the unsteady and narrowing middle ground between state socialism and fascism, showing how he defended liberalism while, at the same time, appreciating socialists' analyses of capitalism's negative impact and their calls for reform and greater economic equality. Through his analysis of Halévy's life and works, Vincent illuminates the complexity of the Third Republic's philosophical, historical, and political thought and concludes with an incisive summary of the distinctive nature of French liberalism.

"K. Steven Vincent excels at intellectual biography and, in this latest book, deploys all available sources to get at the roots and substance of Élie Halévy's thinking. The result is a deftly organized, lucidly written, comprehensive, and meticulous exposition of Halévy's considerable and varied opus that successfully captures his complexity and depth."—Susan Ashley, Colorado College