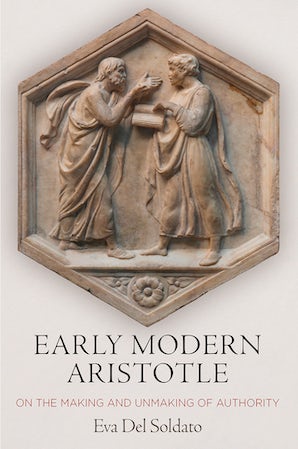 On the Making and Unmaking of Authority

In his Nicomachean Ethics, Aristotle affirms that despite his friendship with Plato, he was a better friend of the truth. With this statement, he rejected his teacher's authority, implying that the pursuit of philosophy does not entail any such obedience. Yet over the centuries Aristotle himself became the authority par excellence in the Western world, and even notorious anti-Aristotelians such as Galileo Galilei preferred to keep him as a friend rather than to contradict him openly. In Early Modern Aristotle, Eva Del Soldato contends that because the authority of Aristotle—like that of any other ancient, including Plato—was a construct, it could be tailored and customized to serve agendas that were often in direct contrast to one another, at times even in open conflict with the very tenets of Peripatetic philosophy.

Arguing that recourse to the principle of authority was not merely an instrument for inculcating minds with an immutable body of knowledge, Del Soldato investigates the ways in which the authority of Aristotle was exploited in a variety of contexts. The stories the five chapters tell often develop along the same chronological lines, and reveal consistent diachronic and synchronic patterns. Each focuses on strategies of negotiation, integration and rejection of Aristotle, considering both macro-phenomena, such as the philosophical genre of the comparatio (that is, a comparison of Aristotle and Plato's lives and doctrines), and smaller-scale receptions, such as the circulation of legends, anecdotes, fictions, and rhetorical tropes ("if Aristotle were alive . . ."), all featuring Aristotle as their protagonist. Through the analysis of surprisingly neglected episodes in intellectual history, Early Modern Aristotle traces how the authority of the ancient philosopher—constantly manipulated and negotiated—shaped philosophical and scientific debate in Europe from the fifteenth century until the dawn of the Enlightenment.

"[I]mmense scholarship . . . A review cannot do justice the enormous mass of primary literature Del Soldato treats in the course of her work. Indeed, despite its relatively modest size, Early Modern Aristotle is destined to become a standard reference work for all scholars investigating any aspect not simply of Aristotelianism but also of subjects as varied as Protestantism, Cartesianism, and science in the Renaissance."—Modern Philology

"Although stating that Aristotle was a great philosopher is a truism, he and his philosophy remain fascinating to scholars; Del Soldato’s book is an excellent example of this fascination..[T]he book gives a detailed and well written overview of the fortune of Aristotle’s authority, its use and abuse in early modern Europe, which will undoubtedly be of interest to any scholar of Aristotelianism and anyone interested in the circulation of thought and intellectual trends."—Renaissance Quarterly

"An ambitious and beautifully researched volume, Early Modern Aristotle tackles a crucial component of Aristotle’s legacy: namely, the notion of authority that has informed the philosopher’s reception through the ages...Early Modern Aristotle sets the bar high, providing scholars with indispensable bearings for digging a goldmine – the Aristotelian tradition –that still awaits to be fully researched."—Erudition and the Republic of Letters

"Early Modern Aristotle admirably demonstrates the pervasive role of Aristotelian authority in the period's philosophical, intellectual, religious, and literary disputes. Offering a comprehensive account of previously examined elements along with an abundance of new materials, the book is a substantial and original contribution to our understanding of a notable feature of early modern thinking."—Jill Kraye, University of London

"Emphasizing the flexibility and ambiguity of philosophical authority that allowed the evocation of Aristotle for multiple purposes, often for contradictory and paradoxical motivations that include the reconciliation, subordination, or even dismantling of his philosophy, Eva Del Soldato provides a valuable reassessment of how the legacy of ancient philosophy functioned in early modern Europe."—Craig Martin, Università Ca'Foscari, Venice