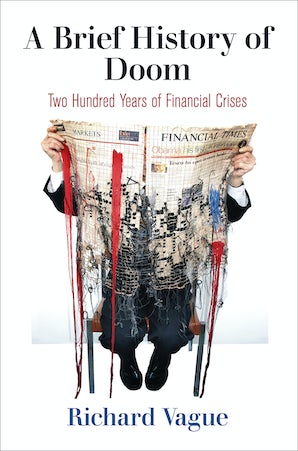 A Brief History of Doom

Financial crises happen time and again in post-industrial economies—and they are extraordinarily damaging. Building on insights gleaned from many years of work in the banking industry and drawing on a vast trove of data, Richard Vague argues that such crises follow a pattern that makes them both predictable and avoidable.

A Brief History of Doom examines a series of major crises over the past 200 years in the United States, Great Britain, Germany, France, Japan, and China—including the Great Depression and the economic meltdown of 2008. Vague demonstrates that the over-accumulation of private debt does a better job than any other variable of explaining and predicting financial crises. In a series of clear and gripping chapters, he shows that in each case the rapid growth of loans produced widespread overcapacity, which then led to the spread of bad loans and bank failures. This cycle, according to Vague, is the essence of financial crises and the script they invariably follow.

The story of financial crisis is fundamentally the story of private debt and runaway lending. Convinced that we have it within our power to break the cycle, Vague provides the tools to enable politicians, bankers, and private citizens to recognize and respond to the danger signs before it begins again.

"Just when U.S. regulators and lenders are showing signs of forgetting the lessons of the 2008 financial crisis, Richard Vague comes out with this timely treatise on the dangers of excessive private debt. Deeply researched yet easily understandable, it's must-reading for anyone who wants to understand the financial crises of the past-and anticipate the catastrophes of the future."—Rich Miller, Bloomberg News

"Richard Vague unmasks a very important insight that financial crises throughout history have originated in bubble formation in the private sector. This diagnosis presents a huge challenge to the political system regarding how to implement the preventative medicine to impede bubbles. The stakes are high for preventing prolonged economic downturns, and the impotence of the public sector is devastating to the reputation of experts and governance, not only in the financial sector but across every division of government. The demoralization on both the left and right after the Great Financial Crisis remains a major contributor to the politics of today. Vague challenges us to face up to these costs."—Robert Johnson, Institute for New Economic Thinking

"Debt is always the biggest indicator of where financial crises will strike next. But while most people focus on government debt, private debt has been overlooked as a risk factor. Richard Vague rectifies that problem-and given that corporate debt is now at record highs-there couldn't be a better time to read his book."—Rana Foroohar, Financial Times

"Debt booms are the Achilles heel of modern economies, and nobody understands this better than Richard Vague. It takes a former banker to expose the folly of lenders in fueling credit booms that lead to devastating financial crises. In his sweeping account of 200 years of financial history, Vague builds on his intimate understanding of banking to explain how private debt booms put economic and social prosperity at risk. This is a must read for anyone who wants to see the next crisis coming."—Moritz Schularick, University of Bonn