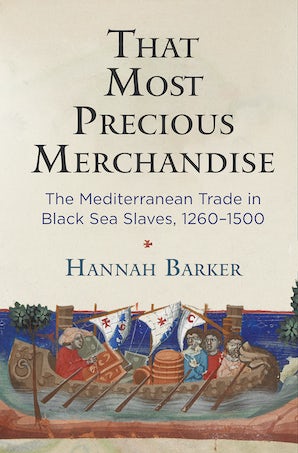 That Most Precious Merchandise

The history of the Black Sea as a source of Mediterranean slaves stretches from ancient Greek colonies to human trafficking networks in the present day. At its height during the fourteenth and early fifteenth centuries, the Black Sea slave trade was not the sole source of Mediterranean slaves; Genoese, Venetian, and Egyptian merchants bought captives taken in conflicts throughout the region, from North Africa, sub-Saharan Africa, the Balkans, and the Aegean Sea. Yet the trade in Black Sea slaves provided merchants with profit and prestige; states with military recruits, tax revenue, and diplomatic influence; and households with the service of women, men, and children.

Even though Genoa, Venice, and the Mamluk sultanate of Egypt and Greater Syria were the three most important strands in the web of the Black Sea slave trade, they have rarely been studied together. Examining Latin and Arabic sources in tandem, Hannah Barker shows that Christian and Muslim inhabitants of the Mediterranean shared a set of assumptions and practices that amounted to a common culture of slavery. Indeed, the Genoese, Venetian, and Mamluk slave trades were thoroughly entangled, with wide-ranging effects. Genoese and Venetian disruption of the Mamluk trade led to reprisals against Italian merchants living in Mamluk cities, while their participation in the trade led to scathing criticism by supporters of the crusade movement who demanded commercial powers use their leverage to weaken the force of Islam.

Introduction
Chapter 1. Slavery in the Late Medieval Mediterranean
Chapter 2. Difference and the Perception of Slave Status
Chapter 3. Societies with Slaves: Genoa, Venice, and the Mamluk Sultanate
Chapter 4. The Slave Market and the Act of Sale
Chapter 5. Making Slaves in the Black Sea
Chapter 6. Constraining Disorder: Merchants, States, and the Structure of the Slave Trade
Chapter 7. Crusade, Embargo, and the Trade in Mamluk Slaves
Conclusion

"This is a significant, interesting, and well-written book about an important topic in the late medieval history of the Mediterranean region and neighboring countries. Hannah Barker describes in detail and convincingly analyzes the robust trade of slaves who passed first through the Black Sea and then spread over much of the Mediterranean basin, as well as the experience of these slaves."—Speculum

"Undoubtably a significant and detailed contribution to our understanding of medieval slavery and of medieval economies . . . Hannah Barker's book is a thorough and engaging evaluation of late medieval slave trading practices in the Mediterranean . . . an impressive survey of slavery in the eastern Mediterranean from the initial grant of Black Sea trading privileges to these groups in the second half of the 13th century to the commercial shifts caused by Ottoman conquest in the late-15th century."—Reviews in History

"[T]his excellent book is now the starting point for any discussion of the Black Sea and Mediterranean slave trade in the later Middle Ages . . . It has brilliantly synthesised the Arabic and Latin-Italian documentary and scholarly traditions, and offers a robust empirical contribution in its deployment of archival material hitherto either unpublished or merely summarised. Its seminal discussion of race and colour in the Middle Ages deserves the attention of all historians of slavery, while its positing of religious difference as the framework in which Mediterranean slavery was conceptualised is likely to be a touchstone for any future scholarship."—Al-Masāq

"Hannah Barker’s That Most Precious Merchandise is one of the most important contributions to the historiography on the medieval slave trade. In particular, it provides a much-needed focus on the trade system that carried slaves from the Black Sea into the Mediterranean during the later Middle Ages. The strength of the book lies in the author’s analysis of the three main importers of these slaves—Genoa, Venice, and the Mamluk sultanate—making it one of the few studies to successfully examine source material in Latin, Italian, and Arabic from these three perspectives… [A]n impeccably researched and incredibly detailed study that brings together a wealth of published and unpublished source material from an impressive range of cultural and linguistic backgrounds. It is an excellent book and Barker should be congratulated on writing what should become regarded as one of the most important works on the medieval slave trade."—International Journal of Middle East Studies

"Barker has suggested that a common slave culture encompassed the Black Sea, Genoa, Venice, and the Mamluk Sultanate and that this commonality is a key to the study of slavery in this period. From now on, this book will be the fundamental place to begin for students of this sorry trade and its sequels."—The Mediterranean Seminar Review

"The Most Precious Merchandise succeeds in painting a compelling picture of the Mediterranean trade in Black Sea slaves and the interdependencies between the various parties . . . It is a successful example of looking at the Mediterranean as one large, coherent area of study,"—H-DIPLO

"This is an exciting and remarkable piece of historical research. It will provide useful stimulus to contemporary scholarship, a model for how to do rigorous thinking about shared Mediterranean cultures, as well as a valuable introduction for undergraduates to how medieval Mediterranean slavery functioned generally...Barker has produced a book that is empirically rich, precise in its thinking, and clear in its writing. It is rich and thought-provoking, and ought to be read by students and specialists alike."—Thee Medieval Review

"Exhaustively researched, meticulously argued, and beautifully written, That Most Precious Merchandise engages questions hotly debated among historians about how 'premoderns' conceptualized and understood differences between peoples. At the same time, it conclusively demonstrates how the slave markets of medieval Italy and Mamluk Egypt were two branches of a single system."—Debra Blumenthal, University of California, Santa Barbara