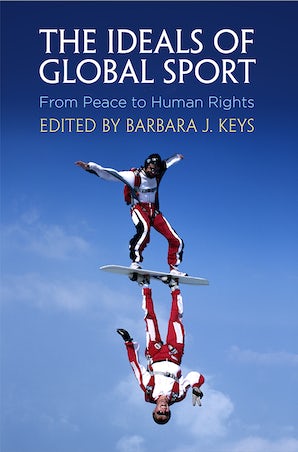 The Ideals of Global Sport

From Peace to Human Rights

"Sport has the power to change the world," South African president Nelson Mandela told the Sporting Club in Monte Carlo in 2000. Today, we are inundated with similar claims—from politicians, diplomats, intellectuals, journalists, athletes, and fans—about the many ways that international sports competitions make the world a better place. Promoters of the Olympic Games and similar global sports events have spent more than a century telling us that these festivals offer a multitude of "goods": that they foster friendship and mutual understanding among peoples and nations, promote peace, combat racism, and spread democracy. In recent years boosters have suggested that sports mega-events can advance environmental protection in a world threatened by climate change, stimulate economic growth and reduce poverty in developing nations, and promote human rights in repressive countries. If the claims are to be believed, sport is the most powerful and effective form of idealistic internationalism on the planet.

The Ideals of Global Sport investigates these grandiose claims, peeling away the hype to reveal the reality: that shockingly little evidence underpins these endlessly repeated assertions. The essays, written by scholars from many regions and disciplines and drawn from an exceptionally diverse array of sources, show that these bold claims were sometimes cleverly leveraged by activist groups to pressure sports bodies into supporting moral causes. But the essays methodically debunk sports organizations' inflated proclamations about the record of their contributions to peace, mutual understanding, antiracism, and democracy.

Exposing enduring shortcomings in the newer realm of human rights protection, from the 1980 Moscow Olympic Games to Brazil's 2014 World Cup and the 2016 Rio Olympics, The Ideals of Global Sport suggests that sport's idealistic pretensions can have distinctly non-idealistic side effects, distracting from the staggering financial costs of hosting the events, serving corporate interests, and aiding the spread of neoliberal globalization.

Conclusion. The Future of Idealism in Sport
—Barbara Jean Keys and Roland Burke

"[E]ach study is well constructed and carefully debunks the hyperbolic and grandiose claims that politicians and sport officials regularly make about 'their' events . . . This is a fascinating book to dip into and useful for sport academics and cultural sociologists alike who will be interested in the semantics and word play around the idealistic aims of the game makers and the host nations' populations who directly experience the negative effects of sport mega events..The book makes a strong case that there is a responsibility to call global sport events to task on their stated claims at the very least."—Cultural Sociology

"Does international sport actually strengthen international understanding and human rights? Any discussion of the future of the beleaguered modern Olympics and other major events, in the current climate of growing xenophobia in many countries, must critically consider this question. This well researched, insightful collection of historical case studies, ably organized with memorable aphorisms by editor Barbara Keys, does exactly that. It is indispensable reading for scholars, journalists, and policymakers alike."—Bruce Kidd, former Olympian and honorary member of the Canadian Olympic Committee

"This book provides a highly readable, fascinating, and valuable set of essays, which together demonstrate in rich detail the gap between the rhetoric and reality of sport's moral discourse. It is essential reading for anyone-student, researcher, or sports fan-who wants to know more about the international politics of contemporary sport."—Professor John Horne, coauthor of Sport and Social Movements: From the Local to the Global

"The Ideals of Global Sport upends the familiar claim that sports possess a transcendent power to make the world a better place. Through a series of excellent case studies, it shows us the layered ways in which such claims are invoked, contrasted with the more complex realities on the ground. It is a timely intervention."—Mark Philip Bradley, University of Chicago