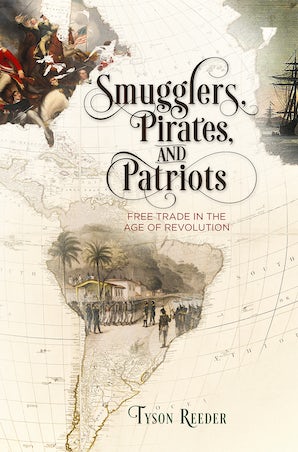 Free Trade in the Age of Revolution

After emerging victorious from their revolution against the British Empire, many North Americans associated commercial freedom with independence and republicanism. Optimistic about the liberation movements sweeping Latin America, they were particularly eager to disrupt the Portuguese Empire. Anticipating the establishment of a Brazilian republic that they assumed would give them commercial preference, they aimed to aid Brazilian independence through contraband, plunder, and revolution. In contrast to the British Empire's reaction to the American Revolution, Lisbon officials liberalized imperial trade when revolutionary fervor threatened the Portuguese Empire in the 1780s and 1790s. In 1808, to save the empire from Napoleon's army, the Portuguese court relocated to Rio de Janeiro and opened Brazilian ports to foreign commerce. By 1822, the year Brazil declared independence, it had become the undisputed center of U.S. trade with the Portuguese Empire. However, by that point, Brazilians tended to associate freer trade with the consolidation of monarchical power and imperial strength, and, by the end of the 1820s, it was clear that Brazilians would retain a monarchy despite their independence.

Smugglers, Pirates, and Patriots delineates the differences between the British and Portuguese empires as they struggled with revolutionary tumult. It reveals how those differences led to turbulent transnational exchanges between the United States and Brazil as merchants, smugglers, rogue officials, slave traders, and pirates sought to trade outside legal confines. Tyson Reeder argues that although U.S. traders had forged their commerce with Brazil convinced that they could secure republican trade partners there, they were instead forced to reconcile their vision of the Americas as a haven for republics with the reality of a monarchy residing in the hemisphere. He shows that as twilight fell on the Age of Revolution, Brazil and the United States became fellow slave powers rather than fellow republics.

PART I. NEGOTIATING EMPIRE
Chapter 1. Empire and Commerce
Chapter 2. The Plague of States

"Tyson Reeder fills a major gap in the historiography of the Age of Revolutions: Luso-Atlantic trade. Reeder marshals diplomatic records, merchants' papers, newspapers, and trade statistics from three continents to connect Anglo-American officials and merchants with their Luso-Brazilian counterparts. The book's connection of economics, foreign relations, race, and ideology represents the virtues of comparative transnational work. Reeder deftly navigates the tensions between government and private interests and between slavery and freedom to ultimately show that free trade, imperialism, and slavery were impossible to disentangle, and that North Americans' contradictory ideas about race and republicanism are best revealed by comparing and connecting the British and Portuguese Empires."—H-DIPLO

"Reeder offers a compelling investigation of trade mentalities and ideological projection…[and his] comparative commercial psychoanalysis illuminates deep connections between Brazil and the early United States that scholars have often overlooked. His research is deeply grounded in archival material from Brazil, Portugal, the United States, and Britain…[A]n an important book for historians of Atlantic commerce and early US–Latin American relations."—Hispanic American Historical Reviw

"Tyson Reeder demonstrates an extraordinary command of both English- and Portuguese-language primary sources as well as the larger conceptual framework of a major transformation in commerce in the Atlantic world during the age of revolution."—Paul Gilje, University of Oklahoma