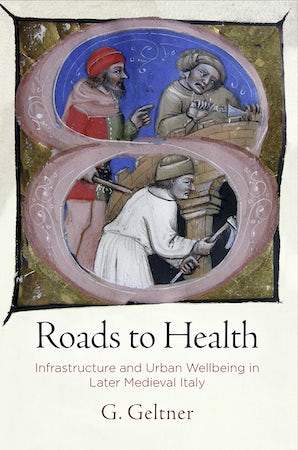 In Roads to Health, G. Geltner demonstrates that urban dwellers in medieval Italy had a keen sense of the dangers to their health posed by conditions of overcrowding, shortages of food and clean water, air pollution, and the improper disposal of human and animal waste. He consults scientific, narrative, and normative sources that detailed and consistently denounced the physical and environmental hazards urban communities faced: latrines improperly installed and sewers blocked; animals left to roam free and carcasses left rotting on public byways; and thoroughfares congested by artisanal and commercial activities that impeded circulation, polluted waterways, and raised miasmas. However, as Geltner shows, numerous administrative records also offer ample evidence of the concrete measures cities took to ameliorate unhealthy conditions. Toiling on the frontlines were public functionaries generally known as viarii, or "road-masters," appointed to maintain their community's infrastructures and police pertinent human and animal behavior. Operating on a parallel track were the camparii, or "field-masters," charged with protecting the city's hinterlands and thereby the quality of what would reach urban markets, taverns, ovens, and mills.

Roads to Health provides a critical overview of the mandates and activities of the viarii and camparii as enforcers of preventive health and safety policies between roughly 1250 and 1500, and offers three extended case studies, for Lucca, Bologna, and the smaller Piedmont town of Pinerolo. In telling their stories, Geltner contends that preventive health practices, while scientifically informed, emerged neither solely from a centralized regime nor as a reaction to the onset of the Black Death. Instead, they were typically negotiated by diverse stakeholders, including neighborhood residents, officials, artisans, and clergymen, and fostered throughout the centuries by a steady concern for people's greater health.

A Note on Dates, Currencies, Wages, and Prices
Rome, 1306: A Prologue

"Shedding much-needed light onto the deep roots of urban infrastructures of health and well-being and stressing the fundamental role those systems played in premodern societies, Roads to Health offers a timely contribution to these discussions…Written in accessible prose and elucidated by supporting tables, charts, and maps, Roads to Health is a must-read for historians of health and medicine, urban historians, and world historians."—Speculum

"In Roads to Health, G. Geltner astutely argues for a public health history in which watershed moments, such as the Black Death and the Industrial Revolution, no longer mark so-called beginnings of urban public health…[Geltner] contributes significantly to the broad fields of medieval and public health history. The detailed case studies from across the medieval world that [he] presents in the book provoke a rethinking of the sharp divide between premodern and modern health history, as well as the notion of watershed moments in premodern public health policy. Rich in legal and financial detail, Roads to Health…attends to the people who utilized and maintained medieval infrastructure as part of larger biopolitical and healthscaping measures."—Comitatus

"[An] important new study of premodern Italian urbanism [that is] seriously relevant to our present circumstances…[Geltner] demonstrate[s] the importance of new research into archives heretofore considered secondary to political and economic documentation…In the face of global pandemic, homelessness, and malnutrition, [this book] highlight[s] the unflattering differences between premodern Italian urbanism and the pale and perilous simulacra of civic life in our own age."—Renaissance Quarterly

"Roads to Health was published just a few months before the outbreak of the Covid-19 pandemic and the subsequent re-emergence into public consciousness of how health issues may impact all of society. In its timely manner this book on public health initiatives in northern Italy at the turn of the fourteenth century relates to significant current debates...[A]n awareness of late medieval public health measures has an analytical merit. Including the medieval past into the history of healthcare offers a thought-provoking perspective on current debates in that it reframes such notions as liability, public and private, and the limits of government power."—The European Legacy

"Geltner writes a vivid, convincing account of medieval healthscaping, illustrating its characteristics and capillary reach...[T]he image that emerges from this compelling study is starkly different from the traditional view of medieval communities as weighed down by an apathetic indifference to sanitary conditions. Supported by extensive archival research and a clear narrative, Roads to Health is an important contribution not only to public health history but more broadly to the social and cultural history of medieval urban Europe."—The Medieval Review

"Since the COVID-19 pandemic, no one can overlook how government policies around disease and the diseased have reconfigured peoples’ daily lives, nor can we overlook the wide variance of opinion around what should be done to manage health among populations. Geltner’s Roads to Health, published just before the global outbreak, innovatively explores these concerns and their solutions in later medieval Italy. With outstanding insight, Geltner offers an entirely new way of analyzing the values people accorded to order and balance in their environment: healthscaping. Recent events have proved his point that top-down economic policy and law work alongside local-level practice to change community health. This is a fast-paced, sharply argued book that reveals medieval cities in constant negotiation between authority and everyday needs, ideals and practical realities, and order and muck."—American Historical Review

"G. Geltner's Roads to Health transforms our understanding of urban life in later medieval Italy, and the premodern world more broadly, not simply by recovering the activities of officials in charge of urban infrastructure and the courts that adjudicated their work but also by pushing the chronology of these 'healthscaping' efforts into the period before the arrival of the Black Death. Geltner's book is as important for historians of medicine and urban life as it is for historians of public health. A singular achievement."—Monica Green, Arizona State University

"A field-changing book, Roads to Health shatters the prevailing narrative that public health administration emerged from industrialization and other processes of Euro-American modernization. Combining richly documented detail and bold historical sweep, G. Geltner demonstrates that teleological assumptions have obscured the history of premodern public health policies, practices, and preventive theories; have distorted efforts to historicize govermentality and biopower; and are complicit with agendas that have claimed public health as a characteristic of civilized, Western modernity."—Kathleen Davis, University of Rhode Island

"Consistently original and innovative, Roads to Health is a major contribution to the study of public health and medieval urban life. It furnishes incontestable documentary proof that northern Italian towns adopted a proactive approach to issues of environmental health long before the Black Death, while developing sophisticated legal and administrative structures to ensure compliance 'on the ground.'"—Carole Rawcliffe, University of East Anglia

"Roads to Health is a spirited and thought-provoking argument for continuity between medieval and modern public health activities and for the existence and preeminence of routine practices over one-off emergency solutions to public health problems."—Paolo Squatriti, University of Michigan