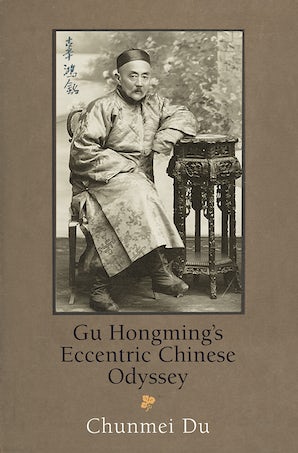 Known for his ultraconservatism and eccentricity, Gu Hongming (1857-1928) remains one of the most controversial figures in modern Chinese intellectual history. A former member of the colonial elite from Penang who was educated in Europe, Gu, in his late twenties, became a Qing loyalist and Confucian spokesman who also defended concubinage, footbinding, and the queue. Seen as a reactionary by his Chinese contemporaries, Gu nevertheless gained fame as an Eastern prophet following the carnage of World War I, often paired with Rabindranath Tagore and Leo Tolstoy by Western and Japanese intellectuals.

Rather than resort to the typical conception of Gu as an inscrutable eccentric, Chunmei Du argues that Gu was a trickster-sage figure who fought modern Western civilization in a time dominated by industrial power, utilitarian values, and imperialist expansion. A shape-shifter, Gu was by turns a lampooning jester, defying modern political and economic systems and, at other times, an avenging cultural hero who denounced colonial ideologies with formidable intellect, symbolic performances, and calculated pranks. A cultural amphibian, Gu transformed from an "imitation Western man" to "a Chinaman again," and reinterpreted, performed, and embodied "authentic Chineseness" in a time when China itself was adopting the new identity of a modern nation-state.

Gu Hongming's Eccentric Chinese Odyssey is the first comprehensive study in English of Gu Hongming, both the private individual and the public cultural figure. It examines the controversial scholar's intellectual and psychological journeys across geographical, national, and cultural boundaries in new global contexts. In addition to complicating existing studies of Chinese conservatism and global discussions on civilization around the World War I era, the book sheds new light on the contested notion of authenticity within the Chinese diaspora and the psychological impact of colonialism.

PART I. INTELLECTUAL JOURNEY
Chapter 2. In Search of the Spirit of the Chinese People
Chapter 3. The Rise of a Spokesman from the East
Chapter 4. Clash of Religions

PART II. PSYCHOLOGICAL PASSAGE
Chapter 5. How an Imitation Western Man Became a Chinaman Again
Chapter 6. Projections on a Chinese Screen
Chapter 7. To Reverence the King
Chapter 8. A Trickster's Trip on a Möbius Strip

"Du's goal is to help us understand the influences that produced such a paradoxical character. In the end, as Du acknowledges, Gu Hongming stubbornly defies analysis. Still, her account of his life is fascinating, particularly for what it reveals about global currents of thought in the early twentieth century . . . The book's real strength is in its exploration of a transnational history of ideas that emphasizes the global nature of circuits of intellectual exchange in the early twentieth-century."—Modern Chinese Literature and Culture

"Gu Hongming matters, as this engaging and sophisticated book shows, because in an age when he has been 'revived as an icon of Chinese nationalism and cultural conservatism', and when 'clash of civilization' essentialisms are grasped at ever more fervently, there is great value in this sort of study of how East and West became 'coconstructed concepts that are fundamentally interactive and mutually transformative', how they are 'imagined together'."—Bulletin of the School of Oriental and African Studies

"Gu Hongming is one of the most controversial and complicated figures in modern Chinese history. Chunmei Du has the broad knowledge, multiple language skills, and keen understanding required to situate Gu and the cultural phenomenon he represented in the international intellectual environment of his time."—Xiaoping Cong, University of Houston

"Gu Hongming's Eccentric Chinese Odyssey is the place to start for anyone interested in intellectual idiosyncrasy or cultural polemics in the late nineteenth and early twentieth centuries. Gu Hongming, who was born in Penang, educated in Scotland, and made a career out of China, fit no mold except that of his own making, much to the chagrin of his contemporaries and biographers. With concision and clarity, Chunmei Du traces this legendary figure's unique trajectories and legacies, not least as a shape-shifting performer attuned to the enduring allure of cultural authenticity."—Christopher Rea, author of The Age of Irreverence: A New History of Laughter in China