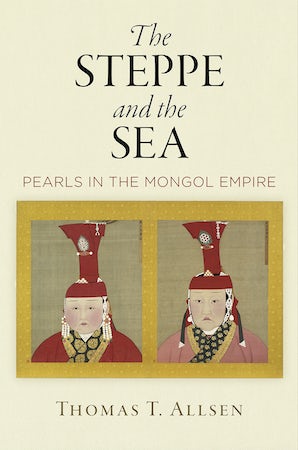 The Steppe and the Sea

Pearls in the Mongol Empire

In 1221, in what we now call Turkmenistan, a captive held by Mongol soldiers confessed that she had swallowed her pearls in order to safeguard them. She was immediately executed and eviscerated. On finding several pearls, Chinggis Qan (Genghis Khan) ordered that they cut open every slain person on the battlefield. Pearls, valued for aesthetic, economic, religious, and political reasons, were the ultimate luxury good of the Middle Ages, and the Chingissid imperium, the largest contiguous land empire in history, was their unmatched collector, promoter, and conveyor. Thomas T. Allsen examines the importance of pearls, as luxury good and political investment, in the Mongolian empire—from its origin in 1206, through its unprecedented expansion, to its division and decline in 1370—in order to track the varied cultural and commercial interactions between the northern steppes and the southern seas.

Focusing first on the acquisition, display, redistribution, and political significance of pearls, Allsen shows how the very act of forming such a vast nomadic empire required the massive accumulation, management, and movement of prestige goods, and how this process brought into being new regimes of consumption on a continental scale. He argues that overland and seaborne trade flourished simultaneously, forming a dynamic exchange system that moved commodities from east to west and north to south, including an enormous quantity of pearls. Tracking the circulation of pearls across time, he highlights the importance of different modes of exchange—booty-taking, tributary relations, market mechanisms, and reciprocal gift-giving. He also sheds light on the ways in which Mongols' marketing strategies made use of not only myth and folklore but also maritime communications networks created by Indian-Buddhist and Muslim merchants skilled in cross-cultural commerce.

In Allsen's analysis, pearls illuminate Mongolian exceptionalism in steppe history, the interconnections between overland and seaborne trade, recurrent patterns in the employment of luxury goods in the political cultures of empires, and the consequences of such goods for local and regional economies.

PART I. FROM THE SEA TO THE STEPPE
Chapter 1. Properties of Pearls
Chapter 2. Fishing and Processing
Chapter 3. Accumulation of Pearls
Chapter 4. Treasures and Treasuries
Chapter 5. Display and Redistribution
Chapter 6. A Consumer Culture
Chapter 7. Fecundity and Good Fortune
Chapter 8. Pearls After the Empire

"By focusing on pearls, Thomas T. Allsen offers new insights into the wider socioeconomic and cultural history of the Mongol Empire. His book is an extremely rich study of the process of southernization and the interaction between maritime and continental trade."—J. J. L. Gommans, University of Leiden

"Based on exhaustive research across multiple languages, The Steppe and the Sea is original and significant and illuminates novel aspects of both the Mongol Empire and Eurasian empires in general."—David Christian, Macquarie University