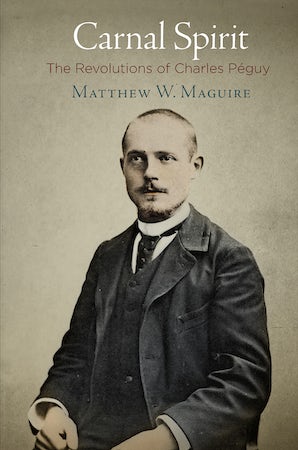 The Revolutions of Charles Péguy

It is rare for a thinker of Charles Péguy's considerable stature and influence to be so neglected in Anglophone scholarship. The neglect may be in part because so much about Péguy is contestable and paradoxical. He strongly opposed the modern historicist drive to reduce writers to their times, yet he was very much a product of philosophical currents swirling through French intellectual life at the turn of the twentieth century. He was a passionate Dreyfusard who converted to Catholicism but was a consistent anticlerical. He was a socialist and an anti-Marxist, and at once a poet, journalist, and philosopher.

Péguy (1873-1914) rose from a modest childhood in provincial France to a position of remarkable prominence in European intellectual life. Before his death in battle in World War I, he founded his own journal in order to publish what he thought most honestly, and urgently, needed to be said about politics, history, philosophy, literature, art, and religion. His writing and life were animated by such questions as: Is it possible to affirm universal human rights and individual freedom and find meaning in a national identity? How should different philosophies and religions relate to one another? What does it mean to be modern?

A voice like Péguy's, according to Matthew Maguire, reveals the power of the individual to work creatively with the diverse possibilities of a given historical moment. Carnal Spirit expertly delineates the historical origins of Péguy's thinking, its unique trajectory, and its unusual position in his own time, and shows the ways in which Péguy anticipated the divisions that continue to trouble us.

Introduction
Chapter 1. Modernity, Antimodernity, and Beyond
Chapter 2. His Youth
Chapter 3. An Answer to the Question: What Is Modernity?
Chapter 4. The Revolution of Critique
Chapter 5. Revolutions of the Body and Work
Chapter 6. Continuity and Revolution: War and Honor
Chapter 7. Universal Particulars, Particular Universalities
Chapter 8. Mysticism and Politics
Chapter 9. The Style of Infinite Reality
Chapter 10. The Christian Revolution
Chapter 11. Despair and Exaltation
Conclusion

"[D]ensely argued, empathetic . . . Matthew Maguire deftly addresses such subjects as Péguy's socialism, which had nothing to do with Karl Marx, but derived from an earlier Gallic source, Charles Fourier, who prophesised a pleasure-based society where libido was a motivating element in work and societal interactions."—Catholic Herald

"[A]n excellent, thorough, engaging critical biography . . . In Carnal Spirit,, Matthew Maguire maps Péguy's complex intellectual world in fin-de-siècle Paris . . . We need, Maguire calls out from the text, a thinker like Péguy who 'upholds the legitimacy of embodied and particular lives, individual and communal, as well as the demands of universal justice and the dignity of all human beings.' And he is right."—French History

"Matthew W. Maguire's mastery of Charles Péguy's voluminous writings is impressive. His book will bring certain contemporary questions into sharp relief, not least the new forms of totalization and control whose early versions Péguy detected at the turn of the twentieth century."—Annette Aronowicz, author of Jews and Christians on Time and Eternity: Charles Péguy's Portrait of Bernard-Lazare