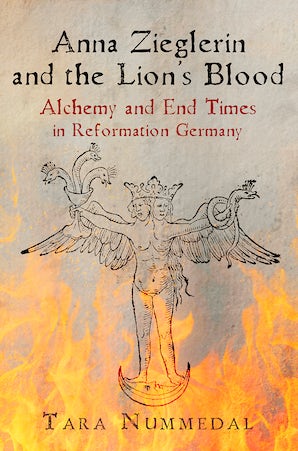 Anna Zieglerin and the Lion's Blood

In 1573, the alchemist Anna Zieglerin gave her patron, the Duke of Braunschweig-Wolfenbüttel, the recipe for an extraordinary substance she called the lion's blood. She claimed that this golden oil could stimulate the growth of plants, create gemstones, transform lead into the coveted philosophers' stone—and would serve a critical role in preparing for the Last Days. Boldly envisioning herself as a Protestant Virgin Mary, Anna proposed that the lion's blood, paired with her own body, could even generate life, repopulating and redeeming the corrupt world in its final moments.

In Anna Zieglerin and the Lion's Blood, Tara Nummedal reconstructs the extraordinary career and historical afterlife of alchemist, courtier, and prophet Anna Zieglerin. She situates Anna's story within the wider frameworks of Reformation Germany's religious, political, and military battles; the rising influence of alchemy; the role of apocalyptic eschatology; and the position of women within these contexts. Together with her husband, the jester Heinrich Schombach, and their companion and fellow alchemist Philipp Sommering, Anna promised her patrons at the court of Wolfenbüttel spiritual salvation and material profit. But her compelling vision brought with it another, darker possibility: rather than granting her patrons wealth or redemption, Anna's alchemical gifts might instead lead to war, disgrace, and destruction. By 1575, three years after Anna's arrival at court, her enemies had succeeded in turning her from holy alchemist into poisoner and sorceress, culminating in Anna's arrest, torture, and public execution.

In her own life, Anna was a master of self-fashioning; in the centuries since her death, her story has been continually refashioned, making her a fitting emblem for each new age. Interweaving the history of science, gender, religion, and politics, Nummedal recounts how one resourceful woman's alchemical schemes touched some of the most consequential matters in Reformation Germany.

Cast of Characters
A Note on Names

"This is a major feat of historical revision for a subject that has too long been the object of mockery and scorn . . . Tara Nummedal's new microhistory demonstrates with scholarly acumen and stylistic élan just how wrong assumptions [about alchemy] are. In a dazzling work of cultural imagination, she eschews all the 'turning lead into gold' nonsense and quickly gets to the conceptual heart of who alchemists were, what they actually believed, and what roles they played in early modern society. Building on deep archival work and sophisticated argumentation, she fashions a truly engaging and revealing microhistory focused on the tragic story of one sixteenth-century practitioner, Anna Zieglerin.""—Preternature

"[A] gripping microhistory that situates alchemy within the histories of imperial politics, Reformation culture, Renaissance self-fashioning, courtly patronage, gender, the body, and sixteenth-century eschatology...With its intriguing storytelling, Anna Zieglerin and the Lion’s Blood is particularly attractive for scholars and students new to the complexities of early modern alchemy. Nummedal maintains a light touch, weaving discussions of sixteenth-century science, magic, religion, and imperial politics into what remains an enthralling tale throughout. She is to be commended for producing a book that does so much to highlight alchemy’s connections to a broad range of Reformation-era developments and that has a chance to bring its history to a wider audience."—Renaissance and Reformation

"Captivating and creative from the earliest pages...Nummedal has skillfully interwoven the history of science and religion, as well as political, social, gender, and court histories via an insightful look into the alchemical theories and practices of the age...[An] erudite and well-written study. Nummedal has produced a fun page-turner and the reader—whether a scholar of any aspect of early modern history or a general reader interested in good stories and good histories—will benefit from this wonderful presentation of alchemy and political intrigue in the courts of the Holy Roman Empire."—The Journal of Modern History

"In this masterful study, Tara Nummedal exposes a previously vilified figure of local German history to sympathetic new scrutiny and in the process, opens a window onto the fantastic worldview of her subject…By employing archival and manuscript evidence along with the older historiography, Nummedal manages to piece together the fascinating story."—American Historical Review

"In Alchemy and Authority, Nummedal made clear how alchemy was deeply integrated into early modern economics and court culture. In this latest effort, Nummedal has accomplished the same goal except on a vastly more ambitious scale, bringing the relevance of alchemy into the politics, religion, diplomacy, court culture, and gender roles of the Holy Roman Empire in the sixteenth century . . . Anna Zieglerin and the Lion's Blood is a remarkable historiographical study . . . In short, Nummedal has contributed a stunning achievement that ideally will reach a wide and diverse audience far beyond historians of science."—Ambix

"[A]an entertaining book, with long stretches reading like a thriller…Anna Zieglerin lived her existence as an alchemist so authentically, was so dedicated body and soul to the matter that not only the substances but also she herself became a victim of the flames. The fact that she is now transmuted into a book and can live on in this way is a testament to Nummedal’s achievement."—Annals of Science

"Anna Zieglerin and the Lion's Blood is perfect for historians and general readers alike. It is written in a vivid and accessible language, and by adopting a nonjudgmental style of reporting Nummedal decisively differs from her predecessors: she refuses to make value judgments about Anna's wondrous and outrageous claims and brand the alchemist a simple charlatan. Instead, she presents the story of a complex and tragic individual, who came up with a unique theory of heavenly alchemy."—Magic, Ritual, and Witchcraft

"Nummedal’s analysis offers particular insights into the history of women’s bodies, the intersections between natural knowledge and politics, and the relationship between self-fashioning and fantasy...The book is meticulously researched and displays the author’s talents for archival sleuthing (which were already known from her first book). Beyond this, it is eminently readable and takes what is strange, foreign, and ripe for misunderstanding, making it comprehensible and relatable."—Journal of the History of Medicine

"Anna Zieglerin and the Lion's Blood is as gripping as a good novel yet so much more than merely an interesting yarn. Tara Nummedal is completely conversant with the milieu in which she locates her story and is very adept in fitting this episode into the broader narratives of sixteenth-century religion, science, and court life."—Philip Soergel, University of Maryland

"Anna Zieglerin and the Lion's Blood is at once a story of one particular woman and a broader discourse on gender and the body, the history of alchemy, the central role of apocalyptic thinking in early modern Germany, and, most interestingly, the nature of historical truth. A remarkable story, expertly told."—Alisha Rankin, Tufts University