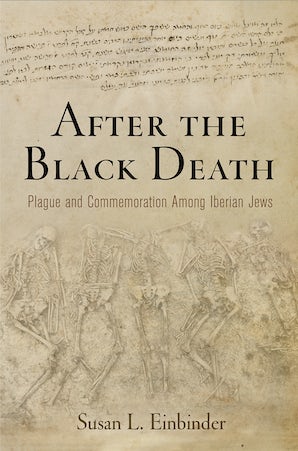 After the Black Death

Plague and Commemoration Among Iberian Jews

The Black Death of 1348-50 devastated Europe. With mortality estimates ranging from thirty to sixty percent of the population, it was arguably the most significant event of the fourteenth century. Nonetheless, its force varied across the continent, and so did the ways people responded to it. Surprisingly, there is little Jewish writing extant that directly addresses the impact of the plague, or even of the violence that sometimes accompanied it. This absence is particularly notable for Provence and the Iberian Peninsula, despite rich sources on Jewish life throughout the century.

In After the Black Death, Susan L. Einbinder uncovers Jewish responses to plague and violence in fourteenth-century Iberia and Provence. Einbinder's original research reveals a wide, heterogeneous series of Jewish literary responses to the plague, including Sephardic liturgical poetry; a medical tractate written by the Jewish physician Abraham Caslari; epitaphs inscribed on the tombstones of twenty-eight Jewish plague victims once buried in Toledo; and a heretofore unstudied liturgical lament written by Moses Nathan, a survivor of an anti-Jewish massacre that occurred in Tàrrega, Catalonia, in 1348.

Through elegant translations and masterful readings, After the Black Death exposes the great diversity in Jewish experiences of the plague, shaped as they were by convention, geography, epidemiology, and politics. Most critically, Einbinder traces the continuity of faith, language, and meaning through the years of the plague and its aftermath. Both before and after the Black Death, Jewish texts that deal with tragedy privilege the communal over the personal and affirm resilience over victimhood. Combined with archival and archaeological testimony, these texts ask us to think deeply about the men and women, sometimes perpetrators as well as victims, who confronted the Black Death. As devastating as the Black Death was, it did not shatter the modes of expression and explanation of those who survived it—a discovery that challenges the applicability of modern trauma theory to the medieval context.

Chapter 1. Before the Plague: Anti-Jewish Violence and the Pastoureaux
Chapter 2. Emanuel ben Joseph: Trauma and the Commemorative Lament
Chapter 3. Abraham Caslari: A Jewish Physician on the Plague
Chapter 4. Stones of Memory: The Toledo Epitaphs
Chapter 5. Bones and Poems: Perpetrators and Victims

"After the Black Death offers a compassionate cultural history of the plague and its influence on the Iberian Jewish community...In her unique style, [Einbinder] both conveys the evocative language of the medieval texts and produces a contemplative history on humanity and resilience. This book is a must read for scholars studying and teaching the plague—not only because of its focus on the Jewish community which unwillingly played an important role in the social events that followed its wake, but for its sensitive and inquisitive attempt to bring to the fore the ways in which the plague, and historical events more broadly, imprint people’s lives. Herein lies its even greater and more universal value."—The Catholic Historical Review