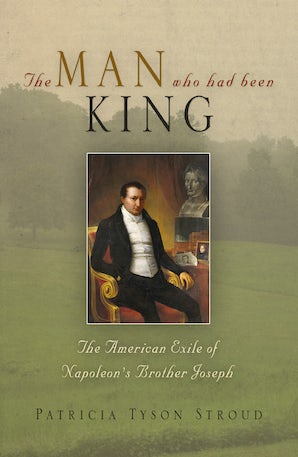 The Man Who Had Been King

Joseph Bonaparte, King of Naples and Spain, claimed that he had never wanted the overpowering roles thrust upon him by his illustrious younger brother Napoleon. Left to his own devices, he would probably have been a lawyer in his native Corsica, a country gentleman with leisure to read the great literature he treasured and oversee the maintenance of his property. When Napoleon's downfall forced Joseph into exile, he was able to become that country gentleman at last, but in a place he could scarcely have imagined.

It comes as a surprise to most people that Joseph spent seventeen years in the United States following Napoleon's defeat at Waterloo. In The Man Who Had Been King, Patricia Tyson Stroud has written a rich account—drawing on unpublished Bonaparte family letters—of this American exile, much of it passed in regal splendor high above the banks of the Delaware River in New Jersey.

Upon his escape from France in 1815, Joseph arrived in the new land with a fortune in hand and shortly embarked upon building and fitting out the magnificent New Jersey estate he called Point Breeze. The palatial house was filled with paintings and sculpture by such luminaries as David, Canova, Rubens, and Titian. The surrounding park extended to 1,800 acres of luxuriously landscaped gardens, with twelve miles of carriage roads, an artificial lake, and a network of subterranean tunnels that aroused much local speculation.

Stroud recounts how Joseph became friend and host to many of the nation's wealthiest and most cultivated citizens, and how his art collection played a crucial role in transmitting high European taste to America. He never ceased longing for his homeland, however. Despite his republican airs, he never stopped styling himself as "the Count de Survilliers," a noble title he fabricated on his first flight from France in 1814, when Napoleon was exiled to Elba, nor did he ever learn more than rudimentary English. Although he would repeatedly plead with his wife to join him, he was not a faithful husband, and Stroud narrates his affairs with an American and a Frenchwoman, both of whom bore him children. Yet he continued to feel the separation from his two legitimate daughters keenly and never stopped plotting to ensure the dynastic survival of the Bonapartes.

In the end, the man who had been king returned to Europe, where he was eventually interred next to the tomb of his brother in Les Invalides. But the legacy of Joseph Bonaparte in America remains, and it is this that Patricia Tyson Stroud has masterfully uncovered in a book that is sure to appeal to lovers of art and gardens and European and American history.