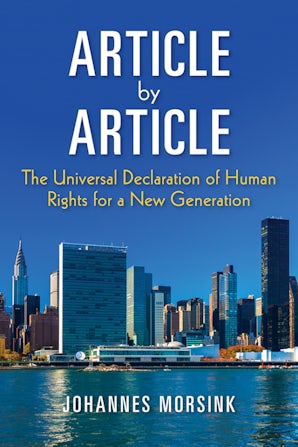 The Universal Declaration of Human Rights for a New Generation

The 1948 Universal Declaration of Human Rights (UDHR) is one of the most important and debated sociopolitical documents of the twentieth century. A leading authority on the UDHR, Johannes Morsink is the author of The Universal Declaration of Human Rights: Origins, Drafting, and Intent (2000) and Inherent Human Rights: Philosophical Roots of the Universal Declaration (2009). With this new book, Morsink has now written a volume for a new generation of human rights students and activists, one that presents an article-by-article account of the formulation of each article in the UDHR. The author comments perceptively on how they have been argued, argued over, and used in a wide range of political discourses. Comprised of short essays on each of the Declaration's thirty articles, this book constitutes the most accessible and comprehensive approach to this document and explicates the UDHR's continued relevance in contemporary times.

Throughout the book, Morsink explains how this 1948 iconic text can help us in the twenty-first century. He shows us the high moral ground we need to fight evils perpetuated during and after World War II that now present themselves in new garb and does so in a clear and concise manner.