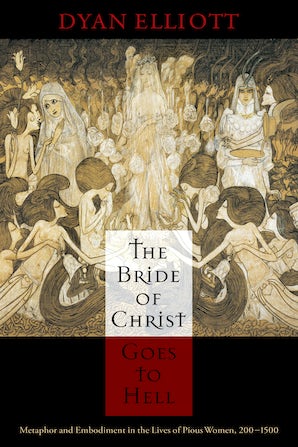 The Bride of Christ Goes to Hell

Metaphor and Embodiment in the Lives of Pious Women, 200-1500

The early Christian writer Tertullian first applied the epithet "bride of Christ" to the uppity virgins of Carthage as a means of enforcing female obedience. Henceforth, the virgin as Christ's spouse was expected to manifest matronly modesty and due submission, hobbling virginity's ancient capacity to destabilize gender roles. In the early Middle Ages, the focus on virginity and the attendant anxiety over its possible loss reinforced the emphasis on claustration in female religious communities, while also profoundly disparaging the nonvirginal members of a given community.

With the rising importance of intentionality in determining a person's spiritual profile in the high Middle Ages, the title of bride could be applied and appropriated to laywomen who were nonvirgins as well. Such instances of democratization coincided with the rise of bridal mysticism and a progressive somatization of female spirituality. These factors helped cultivate an increasingly literal and eroticized discourse: women began to undergo mystical enactments of their union with Christ, including ecstatic consummations and vivid phantom pregnancies. Female mystics also became increasingly intimate with their confessors and other clerical confidants, who were sometimes represented as stand-ins for the celestial bridegroom. The dramatic merging of the spiritual and physical in female expressions of religiosity made church authorities fearful, an anxiety that would coalesce around the figure of the witch and her carnal induction into the Sabbath.

Introduction
Chapter 1. A Match Made in Heaven: The Bride in the Early Church
Chapter 2. The Church Fathers and the Embodied Bride
Chapter 3. The Barbarian Queen
Chapter 4. An Age of Affect, 1050-1200 (1): Consensuality and Vocation
Chapter 5. An Age of Affect, 1050-1200 (2): The Conjugal Reflex
Chapter 6. The Eroticized Bride of Hagiography
Chapter 7. Descent into Hell
Conclusion

"A dazzling book . . . As Elliott persuasively argues, the seeming elevation of the religious woman as a bride of Christ also raised the specter of her potential faithlessness: the bride was held to be permanently at risk of falling into the arms of the wrong lover, whether human or, worse, demonic. By the later Middle Ages, the bride of Christ was on a downward trajectory . . . As Elliott so convincingly shows, the virgin bride was a dangerous identification for women from the very outset: the virgin, seemingly elevated as Christ's bride, had nowhere to go but down."—Church History

"Elliott's work provides an excellent overview of both the metaphorical and literal bride of Christ who undoubtedly played a central role in the evolution of Christianity . . . Despite the dark overtones implicit in Elliott's brilliant title and argument, this book is a must read for those interested in religious or gender history of the Middle Ages."—Comitatus

"Elliott's historiographical account is an illuminating one. Her command of primary source material, and sensitivity to theories of corporeality, comingle in a compelling work of cultural history. Incorporating biblical commentaries, hagiographies, treatises, sermons, natural philosophy, chronicles, inquisitorial documents, and secular literature, Elliott weaves the particularities of heterogeneous historic moments and theological positions into a continuous narrative . . . Elliott shows convincingly that not all ideals, even religious ones, should be incarnated."—Anglican and Episcopal History

"This provocative, meticulously documented text analyzes a wide range of familiar and lesser-known medieval authors on an important topic . . . the journey is engaging and instructive.""—Catholic Historical Review

"This is a great book, with an overarching design, a bold and provocative argument, and a sweeping narrative, fashioned with a penetrating look and written in a reassuringly smart, witty voice."—Gábor Klaniczay, Central European University