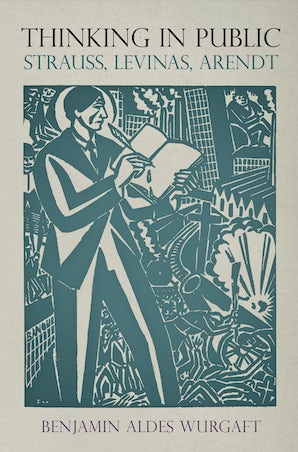 Long before we began to speak of "public intellectuals," the ideas of "the public" and "the intellectual" raised consternation among many European philosophers and political theorists. Thinking in Public examines the ambivalence these linked ideas provoked in the generation of European Jewish thinkers born around 1900. By comparing the lives and works of Hannah Arendt, Emmanuel Levinas, and Leo Strauss, who grew up in the wake of the Dreyfus Affair and studied with the philosopher—and sometime National Socialist—Martin Heidegger, Benjamin Aldes Wurgaft offers a strikingly new perspective on the relationship between philosophers and politics.

Rather than celebrate or condemn the figure of the intellectual, Wurgaft argues that the stories we tell about intellectuals and their publics are useful barometers of our political hopes and fears. What ideas about philosophy itself, and about the public's capacity for reasoned discussion, are contained in these stories? And what work do we think philosophers and other thinkers can and should accomplish in the world beyond the classroom? The differences between Arendt, Levinas, and Strauss were great, but Wurgaft shows that all three came to believe that the question of the social role of the philosopher was the question of their century. The figure of the intellectual was not an ideal to be emulated but rather a provocation inviting these three thinkers to ask whether truth and politics could ever be harmonized, whether philosophy was a fundamentally worldly or unworldly practice.

PART I. LEO STRAUSS AND THE PROBLEM OF "THE INTELLECTUAL"
Chapter 1. Moderns and Medievals
Chapter 2. The Exoteric Writing Thesis
Chapter 3. Natural Right and Tyranny

PART II. THE DOG AT THE END OF THE VERSE: EMMANUEL LEVINAS BETWEEN ETHICS AND ENGAGEMENT
Chapter 4. Growth of a Moralist
Chapter 5. Resisting Engagement
Chapter 6. Witnessing

PARTIV. A MISSED CONVERSATION
Chapter 10. Toward a Jewish Socrates?

"In his powerful and beautifully written Thinking in Public, Benjamin Wurgaft explores how three giants of twentieth-century thought, Leo Strauss, Emmanuel Levinas, and Hannah Arendt, grappled with the intertwined roles of intellectuals and Jews in modern society. . . . By situating the relationship between thinkers and their public at the center of his protagonists' careers, Wurgaft brings a fresh perspective to texts that have been thoroughly plowed by countless scholars. . . . A tremendous achievement."—The Journal of Modern History

"In this wonderfully sweeping and also lovingly detailed book, Benjamin Wurgaft explores the ideas of 'the intellectual' and 'the public' in the work of Leo Strauss, Emmanuel Levinas, and Hannah Arendt. Thinking in Public is beautifully written, carefully argued, and hugely important at a time when 'public intellectuals' are proliferating, their place in political life is contested, and technology is wildly expanding their productivity and reach."—Politics, Religion & Ideology

"In this beautifully written and elegantly argued book, Benjamin Wurgaft brings together three seminal thinkers and uses each to illuminate the others. This is a masterful work of intellectual history, which also raises important normative questions about the scope and nature of philosophy, politics, and religion. Anyone interested in the legacy of European and Jewish thought in the twentieth century, as well as anyone concerned with what public intellectuals can offer us today, will learn a tremendous amount from this wonderful book."—Leora Batnitzky, author of Leo Strauss and Emmanuel Levinas: Philosophy and the Politics of Revelation

"A magnificent exploration of philosophy and politics in the second half of the twentieth century. Wurgaft places in conversation the writings of Hannah Arendt, Emmanuel Levinas, and Leo Strauss and interrogates a profound tension in their thought: on the one hand, their belief in the philosophic responsibility to engage political and moral life and, on the other, their deep distrust of public intellectuals. Wurgaft shows how the former commitment stems from each thinker's explicit or unwitting appropriation of Jewish philosophic resources, and how the latter revulsion constitutes a response to the complicity of many esteemed mentors and peers with the Nazi regime that forced them into exile. Wurgaft's exposition is illuminating at every turn and compels readers to rethink the relationship of theory and practice, philosophy and power, politics and emigration in the twentieth century and beyond."—John P. McCormick, University of Chicago

"Wurgaft deftly creates a constellation of three iconic twentieth-century Jewish thinkers, revealing crucial differences but also striking similarities in how they construed the role of the public intellectual-and, indeed, of public thought itself. Intellectual history at its best."—Eugene R. Sheppard, Brandeis University, author of Leo Strauss and the Politics of Exile: The Making of a Political Philosopher