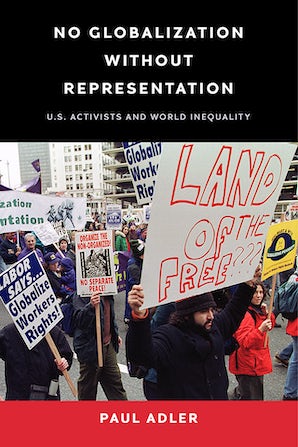 No Globalization Without Representation

Amid the mass protests of the 1960s, another, less heralded political force arose: public interest progressivism. Led by activists like Ralph Nader, organizations of lawyers and experts worked "inside the system." They confronted corporate power and helped win major consumer and environmental protections. By the late 1970s, some public interest groups moved beyond U.S. borders to challenge multinational corporations. This happened at the same time that neoliberalism, a politics of empowerment for big business, gained strength in the U.S. and around the world.

No Globalization Without Representation is the story of how consumer and environmental activists became significant players in U.S. and world politics at the twentieth century's close. NGOs like Friends of the Earth and Public Citizen helped forge a progressive coalition that lobbied against the emerging neoliberal world order and in favor of what they called "fair globalization." From boycotting Nestlé in the 1970s to lobbying against NAFTA to the "Battle of Seattle" protests against the World Trade Organization in the 1990s, these groups have made a profound mark.

This book tells their stories while showing how public interest groups helped ensure that a version of liberalism willing to challenge corporate power did not vanish from U.S. politics. Public interest groups believed that preserving liberalism at home meant confronting attempts to perpetuate conservative policies through global economic rules. No Globalization Without Representation also illuminates how professionalized organizations became such a critical part of liberal activism—and how that has affected the course of U.S. politics to the present day.

List of Abbreviations
Introduction
Prologue. The Good Parts of the System to Beat the Bad

Part IV. We Fought Big Against NAFTA and Lost
Chapter 13. What Do You All Export?
Chapter 14. New Schisms and New Alliances
Chapter 15. Our Job Is to Get Him to Bend in Our Direction
Chapter 16. NAFTA Is the Future

Part V. Rebuilding to Victory in the 1990s
Chapter 17. We Are All Asking, Where Are We?
Chapter 18. To Expose the Entire Free-Trade Model
Chapter 19. Derailing Fast Track
Chapter 20. We Seem to Be Winning

Part VI. You Must Come to Seattle!
Chapter 21. Everybody Clear Your Calendars
Chapter 22. Shut Down the WTO!
Chapter 23. Battling in Seattle
Chapter 24. A Messy Miracle
Coda. A Multiheaded Swarm of a Movement

"[A] remarkable book...Adler seamlessly weaves together the various forms of activism carried out by the fair globalizers. In doing so, he highlights the difficulties faced by public interest progressives, as evidenced by their growing reliance on grassroots activists in the 1990s and beyond in the face of the bipartisan consensus on neoliberalism. Simply put, the lesson of Adler’s book is that if progressives of the twenty-first century hope to fundamentally alter the status quo, whether in relation to the economy, climate change, or foreign policy, it will take more than just public interest groups. They need to confront powerbrokers in the halls of power and on the streets, in the United States and abroad."—Global Policy

"Paul Adler’s study is one of those examples of scholarship that is at the same time informative, engaging, timely, and compelling.Furthermore,forsomebodywhowitnessed firsthand many of the events Adler talks about,thegustoofrevivingthemisconjoined with the intellectual pleasure of seeing them—eventually—so finely historicized. The praise is even more deserved if one thinks of the nature of the matter on Adler’s hands. Dealingwiththeriseofawiderantiglobalization movement—or 'fair globalization' movement, as Adler puts it—is a daunting task."—H-Diplo

"With razor-sharp clarity and a well-paced narrative, Paul Adler has written a riveting history of political conflicts over multinational corporations and economic liberalization. The book contains many memorable stories of political conflicts, from the halls of the World Health Organization in Geneva to street protests in Seattle. Deeply researched and eminently readable, the book enriches our understanding of globalization and some of its fiercest critics."—Stephen Macekura, Indiana University