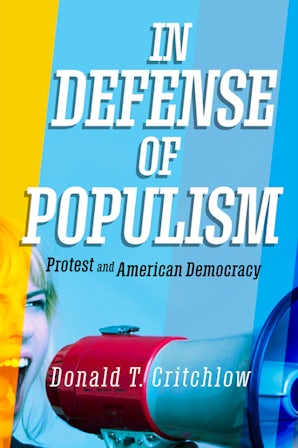 In Defense of Populism

Contrary to warnings about the dangers of populism, Donald F. Critchlow argues that grassroots activism is essential to party renewal within a democratic system.

Grassroots activism, presenting a cacophony of voices calling for reform of various sorts without programmatic coherence, is often derided as populist and distrusted by both political parties and voters. But according to Donald T. Critchlow, grassroots movements are actually responsible for political party transformation, both Democratic and Republic, into instruments of reform that reflect the interests, concerns, and anxieties of the electorate.

Contrary to popular discourse warning about the dangers of populism, Critchlow argues that grassroots activism is essential to party renewal within a democratic system. In Defense of Populism examines movements that influenced Republican, Democratic, and third-party politics—from the Progressives and their influence on Teddy Roosevelt, to New Dealers and FDR, to the civil rights, feminist, and environmental movements and their impact on the Democratic Party, to the Reagan Revolution and the Tea Party. In each case, Critchlow narrates representative biographies of activists, party leaders, and presidents to show how movements become viable calls for reform that get translated into policy positions.

Social tensions and political polarization continue to be prevalent today. Increased social disorder and populist outcry are expected whenever political elites and distant bureaucratic government are challenged. In Defense of Populism shows how, as a result of grassroots activism and political-party reform, policy advances are made, a sense of national confidence is restored, and the belief that American democracy works in the midst of crisis is affirmed.

"Populism has become a dirty word-the dirty word-in politics, in America and around the world. But, as historian and longtime political analyst Donald Critchlow explains, popular activism, of the left and of the right, has been a major force in American history, and usually a force for the good. His evenhanded analysis will prove revealing to anyone tired of the name-calling that pervades so much political commentary today."—Michael Barone, senior political analyst, Washington Examiner

"Donald Critchlow's spirited defense of American populism drives home an important fact: social movements have been essential to American democracy as a source of revision and renewal for the nation's major political parties. Critchlow opens for intelligent debate issues that are central to comprehending the present as well as the past, not least the distinctions between authentic grass-roots insurgencies and those manipulated and even created by already powerful interests. Nobody should think of either rejecting or embracing the populist mythos without reading this book."—Sean Wilentz, author of The Politicians and the Egalitarians: The Hidden History of American Politics

"Some readers might think it's audacious to link the People's Party, the Black Panthers, and the John Birch Society, but Donald T. Critchlow's compelling and timely book uncovers the radicalism that runs like a silver thread through American history. We discover the importance of grassroots activism, of the inevitable (sometimes comic) factionalism and, most importantly, that populism usually loses when it wins. The Democrats and Republicans have lasted this long by absorbing new ideas and movements, and Critchlow demonstrates that as left-wing populism was translated into welfare state bureaucracy, so it triggered the right-wing populism that tore it down. This is a beautifully researched, important book. Its implication-that Donald Trump, love him or loathe him, arose from an authentically American tradition that draws from both Left and Right-is a vital contribution to U.S. political history."—Tim Stanley, columnist and lead writer, Daily Telegraph