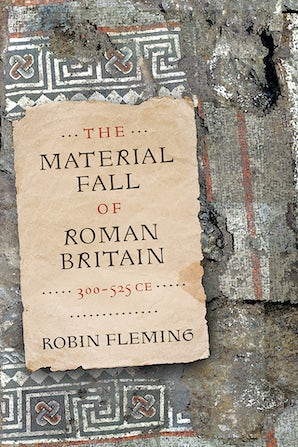 Although lowland Britain in 300 CE had been as Roman as any province in the empire, in the generations on either side of 400, urban life, the money economy, and the functioning state collapsed. Many of the most quotidian and fundamental elements of Roman-style material culture ceased to be manufactured. Skills related to iron and copper smelting, wooden board and plank making, stone quarrying, commercial butchery, horticulture, and tanning largely disappeared, as did the knowledge standing behind the production of wheel-thrown, kiln-fired pottery and building in stone. No other period in Britain's prehistory or history witnessed the loss of so many classes of once-common skills and objects. While the reasons for this breakdown remain unclear, it is indisputable the collapse was foundational in the making of a new world we characterize as early medieval.

The standard explanation for the emergence of the new-style material culture found in lowland Britain by the last quarter of the fifth century is that foreign objects were brought in by "Anglo-Saxon" settlers. Marshalling a wealth of archaeological evidence, Robin Fleming argues instead that not only Continental immigrants, but also the people whose ancestors had long lived in Britain built this new material world together from the ashes of the old, forging an identity that their descendants would eventually come to think of as English. As with most identities, she cautions, this was one rooted in neither birth nor blood, but historically constructed, and advanced and maintained over the generations by the shared material culture and practices that developed during and after Rome's withdrawal from Britain.

Introduction. Down a Rabbit Hole?
Chapter 1. The World the Annona Made
Chapter 2. The Rise and Fall of Plants, Animals, and Places
Chapter 3. Why Pots Matter
Chapter 4. The Afterlife of Roman Ceramic and Glass Vessels
Chapter 5. Pragmatic, Symbolic, and Ritual Use of Roman Brick and Quarried Stone
Chapter 6. Metal Production Under and After Rome
Chapter 7. Living with Little Corpses
Chapter 8. Who Was Buried in Early Anglo-Saxon Cemeteries?
Chapter 9. The Great Disentanglement

"[A] readable and thought-provoking volume, which draws not only on a wide range of published works, but also on the wealth of information recorded in ‘grey literature’ fieldwork reports available on the archaeology data service (ADS). The author is to be congratulated for having spent more time than most engaging with this valuable archive and, it is to be hoped, drawing its existence to the attention of a wider audience. Fleming writes as a historian partly for historians, who are often unaware of how much archaeological evidence exists, but also in an attempt to bridge the other scholarly gap she rightly identifies, between Romanists and early medievalists. She also focuses on the lives of ordinary people instead of the warlords and saints of the written sources, which still colour popular perception of this period…[A]n interesting and stimulating book that provides an account of the unravelling of Roman Britain, clearly linked to the lives of those who experienced it."—Antiquity

"This book marks a crucial step forward in understanding how to look at the massive changes wrought during the fifth century AD in the archaeology of what had been the areas of Britain under Roman rule, and consequently in understanding what was going on and why...This book is a very substantial achievement and will become a standard resource for ideas and information at all academic levels."—Plekos

"Robin Fleming here provides an engaging and thought-provoking account of the end of Roman Britain and its immediate aftermath. The focus is on particular categories of material culture and their socio-economic context...[A]n extremely welcome addition to scholarly discourse, and is one that will be accessible also to students and the informed public."—Medieval Archaeology

"What The Material Fall achieves is to present a new (and in places speculative) vision of Britain between the fourth and sixth centuries. It is fluently written and founded on a detailed understanding of a wide range of diverse evidence...[I]t offers new approaches that sidestep the tired and probably unresolvable discussions of continuity, discontinuity, and ethnicity. This is no mean achievement. These new approaches are desperately needed by a field of research that finds itself in a state of tension over its own identity. What the future holds, and which approach, or approaches, will shape research over the coming decades remains unclear. It’s an exciting time to work on Late Antiquity and the transition from Late Roman to Early Medieval."—American Journal of Archaeology

"Fleming's approach to this era of significant change in British history is a refreshing take on the transitional period at the end of Roman Britain and the beginning of Saxon settlement...The work is a welcome addition to existing literature, operating as a happy medium between text-based analysis of material culture and the more analytical texts often devoted to individual elements of material culture. Overall, the book is an enjoyable and thought-provoking read."—The Classical Review

"Robin Fleming uses evidence from archaeology to reassess the transition from the Roman to early medieval period in England. Critiquing previous approaches that have relied too heavily on written texts of later date, Fleming places emphasis instead on the changes in material conditions that impacted on the lives of ordinary people. This is an original and refreshing approach that has not previously been attempted on this scale. The Material Fall of Roman Britain, 300-525 CE is an extremely important and well-written book, and one that deserves a very broad readership."—Martin Millett, University of Cambridge