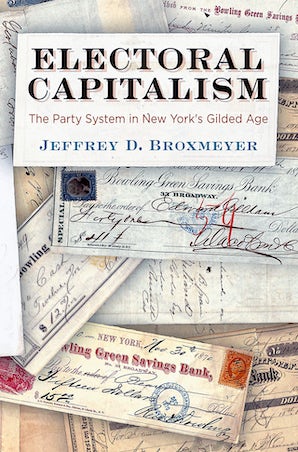 Vast fortunes grew out of the party system during the Gilded Age. In New York, party leaders experimented with novel ways to accumulate capital for political competition and personal business. Partisans established banks. They drove a speculative frenzy in finance, real estate, and railroads. And they built empires that stretched from mining to steamboats, and from liquor distilleries to newspapers. Control over political property—party organizations, public charters, taxpayer subsidies, and political offices—served to form governing coalitions, and to mobilize voting blocs.

In Electoral Capitalism, Jeffrey D. Broxmeyer reappraises the controversy over wealth inequality, and why this period was so combustible. As ranks of the dispossessed swelled, an outpouring of claims transformed the old spoils system into relief for the politically connected poor. A vibrant but scorned culture of petty officeholding thus emerged. By the turn of the century, an upsurge of grassroots protest sought to dislodge political bosses from their apex by severing the link between party and capital.

Examining New York, and its outsized role in national affairs, Broxmeyer demonstrates that electoral capitalism was a category of entrepreneurship in which the capture of public office and the accumulation of wealth were mutually reinforcing. The book uncovers hidden economic ties that wove together presidents, senators, and mayors with business allies, spoilsmen, and voters. Today, great political fortunes have dramatically returned. As current public debates invite parallels with the Gilded Age, Broxmeyer offers historical and theoretical tools to make sense of how politics begets wealth.

Can't You Help Me in Gettin the Vacant Place for Me
Chapter 3. Partisan Poor Relief

The Henry George Boom Fades
Chapter 4. Anti-Monopoly in the Age of Party Consolidation

"Jeffrey D. Broxmeyer has made an important original contribution to our understanding of Gilded Age America… [Electoral Capitalism’s] originality and forceful larger argument—that the history of democracy in America and the history of American capitalism cannot be fully understood without grasping the fusion of both within electoral politics—make it required reading for historians of politics. The Gilded Age will never look quite the same."—Journal of American History

Overall, Electoral Capitalism gives a painstakingly researched view of New York City’s early machine politics.
That view includes an extensive analysis of the lesser understood Republican organization, its ties to the national-level party system, and how its interaction with Tammany shaped both parties’ strategies and agendas. The book also skillfully sets the stage for a nuanced understanding of the Progressive Era.

"It is heartening to welcome new work that takes Gilded Age American politics seriously. Progressive-Era political scientists and historians wrote the first draft of the history of the period’s politics...Electoral Capitalism will provide historians and political scientists the erudition and inspiration to re-think the re-organization of party politics after the Civil War."—Paula Baker, Journal of Interdisciplinary History

"Broxmeyer’s book provides a useful analytical framework that scholars can apply to interpreting corruption in our own era."—New York History

"Jeffrey D. Broxmeyer makes a timely and important contribution to our understanding of electoral systems. In his bold and illuminating study, he challenges historical and empirical accounts of the electoral system through a meticulously researched analysis of politics in Gilded Age New York."—Jeffrey Selinger, Bowdoin College