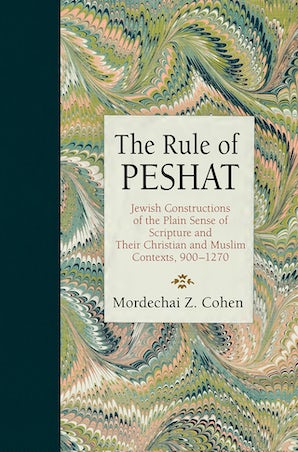 The Rule of Peshat

Jewish Constructions of the Plain Sense of Scripture and Their Christian and Muslim Contexts, 900-1270

Within the rich tradition of Jewish biblical interpretation, few concepts are as vital as peshat, often rendered as the "plain sense" of Scripture. Generally contrasted with midrash—the creative and at times fanciful mode of reading put forth by the rabbis of Late Antiquity—peshat came to connote the systematic, philological-contextual, and historically sensitive analysis of the Hebrew Bible, coupled with an appreciation of the text's literary quality. In The Rule of "Peshat," Mordechai Z. Cohen explores the historical, geographical, and theoretical underpinnings of peshat as it emerged between 900 and 1270.

Adopting a comparative approach that explores Jewish interactions with Muslim and Christian learning, Cohen sheds new light on the key turns in the vibrant medieval tradition of Jewish Bible interpretation. Beginning in the tenth century, Jews in the Middle East drew upon Arabic linguistics and Qur'anic study to open new avenues of philological-literary exegesis. This Judeo-Arabic school later moved westward, flourishing in al-Andalus in the eleventh century. At the same time, a revolutionary peshat school was pioneered in northern France by the Ashkenazic scholar Rashi and his circle of students, whose methods are illuminated by contemporaneous trends in Latinate learning in the Cathedral Schools of France. Cohen goes on to explore the heretofore little-known Byzantine Jewish exegetical tradition, basing his examination on recently discovered eleventh-century commentaries and their offshoots in southern Italy in the twelfth century. Lastly, this study focuses on three pivotal figures who represent the culmination of the medieval Jewish exegetical tradition: Abraham Ibn Ezra, Moses Maimonides, and Moses Nahmanides. Cohen weaves together disparate Jewish disciplines and external cultural influences through chapters that trace the increasing force acquired by the peshat model until it could be characterized, finally, as the "rule of peshat": the central, defining feature of Jewish hermeneutics into the modern period.

"Cohen’s proficient use of both prior research and the primary sources is simultaneously far-reaching in breadth and granular in detail...Cohen’s insights are eye-opening, his examples clear and persuasive, and his conclusions leave no room for argument. For the scholar and lay person alike who mistakenly conceive of the Jewish tradition as self-contained and untouched by intellectual developments in the outside world, or for anyone interested in medieval Judaism, Cohen’s book is required reading."—Medieval Encounters

"Cohen has made his point and made it well...[The] tug of war between peshat and nonpeshat interpretation, and the fluctuation in what peshat itself could mean, reflect a larger interpretive question: Does the precise formulation of Scripture matter, or (as Abraham Ibn Ezra asserted) did the Bible’s human writers formulate God’s ideas in language of their own? Cohen’s book will leave readers with four centuries’ worth of fascinating discussion of that question."—Review of Biblical Literature

"The Rule of 'Peshat' is an enormously useful and brilliantly insightful work whose time has certainly come. Mordechai Z. Cohen's important contribution to the study of medieval Jewish biblical exegesis reflects his unsurpassed expertise in this area."—Baruch J. Schwartz, The Hebrew University of Jerusalem

"In this monumental study, Mordechai Z. Cohen reveals the theoretical complexities that attend the construction of peshat, the 'plain sense' or 'literal sense' of Jewish biblical hermeneutics. Cohen's erudite and wide-ranging analysis breaks down what has been viewed too easily as monolithic. Through his acute readings, peshat emerges as a multi-linguistic and cross-cultural tradition, as Jewish interpreters amalgamated influences from Christianity and Islam, from Byzantium and Western Asia, and from al-Andalus to northern France and the Rhineland."—Rita Copeland, University of Pennsylvania