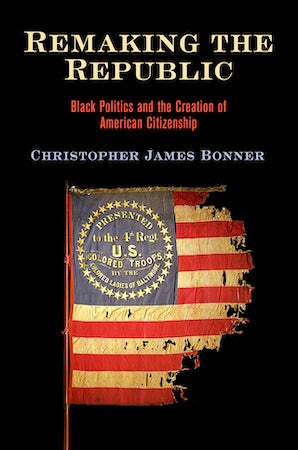 Black Politics and the Creation of American Citizenship

Citizenship in the nineteenth-century United States was an ever-moving target. The Constitution did not specify its exact meaning, leaving lawmakers and other Americans to struggle over the fundamental questions of who could be a citizen, how a person attained the status, and the particular privileges citizenship afforded. Indeed, as late as 1862, U.S. Attorney General Edward Bates observed that citizenship was "now as little understood in its details and elements, and the question as open to argument and speculative criticism as it was at the founding of the Government."

Black people suffered under this ambiguity, but also seized on it in efforts to transform their nominal freedom. By claiming that they were citizens in their demands for specific rights, they were, Christopher James Bonner argues, at the center of creating the very meaning of American citizenship. In the decades before and after Bates's lament, free African Americans used newspapers, public gatherings, and conventions to make arguments about who could be a citizen, the protections citizenship entailed, and the obligations it imposed. They thus played a vital role in the long, fraught process of determining who belonged in the nation and the terms of that belonging.

Remaking the Republic chronicles the various ways African Americans from a wide range of social positions throughout the North attempted to give meaning to American citizenship over the course of the nineteenth century. Examining newpsapers, state and national conventions, public protest meetings, legal cases, and fugitive slave rescues, Bonner uncovers a spirited debate about rights and belonging among African Americans, the stakes of which could determine their place in U.S. society and shape the terms of citizenship for all Americans.

Introduction: Making Black Citizenship Politics
Chapter 1. An Integral Portion of This Republic
Chapter 2. "Union Is Strength": Building an American Citizenship
Chapter 3. Nations, Revolutions, and the Borders of Citizenship
Chapter 4. Runaways, or Citizens Claimed as Such
Chapter 5. Contesting the "Foul and Infamous Lie" of Dred Scott
Chapter 6. Black Politics and the Roots of Reconstruction
Epilogue: The Enduring Search for Home

Christopher James Bonner is Associate Professor of History at the University of Maryland.

"Remaking the Republic makes an important contribution to the intellectual, political, and legal history of the United States...[N]ot simply a snapshot of free Black Americans’ lives in the nineteenth century, [it] is also an origin story that acknowledges and critically surveys the integral role of free Black Americans in the making of American citizenship."—Journal of the Civil War Era

"Christopher Bonner’s well-researched book deftly explores specific forms of political work that Black activists pursued in the fight for citizenship in the United States...Bonner’s writing and analysis compels readers to appreciate the diversity of thought as a hallmark of Black protest politics and the intellectual labor of Black activists in constructing the American Republic."—Early American Literature

"[A] rich analysis of how American citizenship was fashioned and defended by African American politicking...By emphasizing the influence of Black activism on the development of American citizenship, Bonner reinforces the need for historians to explore extra-legal modes of belonging. Ultimately, the texture of what it means to be an American citizen can only be fully understood through the lens of those making claims to it."—American Nineteenth Century History

"How could free black people in the antebellum era, relegated to an apparent caste status, sustain hope in a future in America? By making and remaking the idea of legal belonging through a fascinating array of grassroots politics and protest, argues Christopher James Bonner. With deep research and persuasive writing, Bonner demonstrates that the sheer 'uncertainty' of American definitions of citizenship opened ways on the margins for blacks to exploit and forge the developing republic before emancipation. This book is full of riveting stories about race and the American political imagination, of how freedom and citizenship took root in a hostile legal soil, and about the enduring power of collective struggle, however rancorous the schisms or how high the racist obstacles. Antebellum blacks used events and the nation's own creeds to make their future American."—David W. Blight, author of the Pulitizer Prize-winning Frederick Douglass: Prophet of Freedom

"Remaking the Republic is a must read for anyone seeking to understand how citizenship has evolved in the United States. Christopher James Bonner show us how black Americans were the first architects of national belonging in the early republic. His ambitious research tells a story about how they countered the racism of colonization schemes and black laws with a shrewd insistence upon their rights as citizens. This inspiring quest contains indispensable lessons about the past and for our own time."—Martha Jones, author of Birthright Citizens: A History of Race and Rights in Antebellum America

"By taking us inside black activists' multifaceted fight for inclusion across much of the nineteenth century, Christopher James Bonner has crafted one of the most compelling, comprehensive stories about black citizenship in all its many manifestations to date."—Anne Twitty, author of Before Dred Scott: Slavery and Legal Culture in the American Confluence, 1787-1857