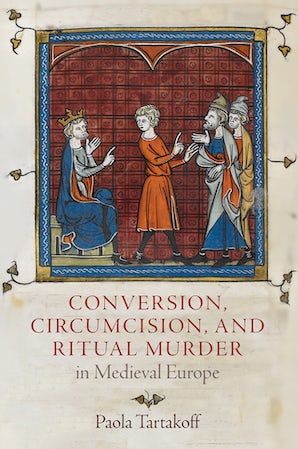 In 1230, Jews in the English city of Norwich were accused of having seized and circumcised a five-year-old Christian boy named Edward because they "wanted to make him a Jew." Contemporaneous accounts of the "Norwich circumcision case," as it came to be called, recast this episode as an attempted ritual murder. Contextualizing and analyzing accounts of this event and others, with special attention to the roles of children, Paola Tartakoff sheds new light on medieval Christian views of circumcision. She shows that Christian characterizations of Jews as sinister agents of Christian apostasy belonged to the same constellation of anti-Jewish libels as the notorious charge of ritual murder. Drawing on a wide variety of Jewish and Christian sources, Tartakoff investigates the elusive backstory of the Norwich circumcision case and exposes the thirteenth-century resurgence of Christian concerns about formal Christian conversion to Judaism. In the process, she elucidates little-known cases of movement out of Christianity and into Judaism, as well as Christian anxieties about the instability of religious identity.

Conversion, Circumcision, and Ritual Murder in Medieval Europe recovers the complexity of medieval Jewish-Christian conversion and reveals the links between religious conversion and mounting Jewish-Christian tensions. At the same time, Tartakoff does not lose sight of the mystery surrounding the events that spurred the Norwich circumcision case, and she concludes the book by offering a solution of her own: Christians and Jews, she posits, understood these events in fundamentally irreconcilable ways, illustrating the chasm that separated Christians and Jews in a world in which some Christians and Jews knew each other intimately.

"Tartakoff's work is groundbreaking. She confirms the processes that shaped the idea of medieval conversion and its practices. She has uncovered its porosity, its cultural fluidity, its interactions, and its connectivity. As among early modern Jews and Christians, the past life of converts could not be eradicated and continued to remain potentially threatening. Without a doubt, this book furthers our understanding considerably not only of the Norwich circumcision case, but of medieval Jewish and Christian conversion in general. It provides an indispensable tool for anyone interested in the subject."—Antisemitism Studies

"Paola Tartakoff is an important voice in the flourishing new scholarship on Jewish-Christian conversions. In this ambitious book she continues her investigation into the social realties of interreligious conversions, turning the spotlight to another aspect this phenomenon that received little attention—the conversion of Christians to Judaism… This impressive book will no doubt become a starting point to any future research on Jewish apostasy among Christians in the Middle Ages. Not only does it assemble the largest collection of allusions to this phenomenon, it also makes a decisive historiographical statement as to its multi-dimensional nature."—Medieval Encounters

"Tartakoff offers a nuanced exploration of how Christians and Jews thought about these compelling yet dangerous movements between faiths. Tartakoff adopts the pioneering approach of intertwining the study of Christian conversion to Judaism with that of Jewish conversion to Christianity . . . By exploring conversion as a bidirectional phenomenon, she offers new insight into both the experiences of converts and the multifaceted attitudes of both communities toward conversion. Her careful delineation of the parallels and divergences between converts paints a portrait of religious transformation, change, and fluidity that is at once broadly synthetic and richly detailed."—Digital Philology

"In her original and impressively researched investigation of medieval Jewish and Christian understandings of religious identity, Paola Tartakoff shows how a single conversion could affect families and entire communities in unpredictable ways. Specialists will welcome the volume of evidence she brings from both archival and published sources, as well as her elegant and persuasive exposition of the critical role of conversion in worsening relationships between Christians and Jews across thirteenth- and fourteenth-century Europe. Non-specialists will find this study entirely accessible."—Robert Stacey, University of Washington