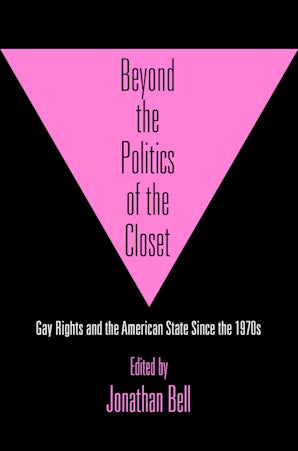 Beyond the Politics of the Closet

Gay Rights and the American State Since the 1970s

A collection of essays that demonstrate how LGBT people played critical roles in local, state, and national politics

In the 1970s, queer Americans demanded access not only to health and social services but also to mainstream Democratic and Republican Party politics. The AIDS crisis of the 1980s made the battles for access to welfare, health care, and social services for HIV-positive Americans, many of them gay men, a critically important story in the changing relationship between sexual minorities and the government. The 1980s and 1990s marked a period in which religious right attacks on the civil rights of minorities, including LGBT people, offered opportunities for activists to create campaigns that could mobilize a base in mainstream politics and contribute to the gradual legitimization of sexual minorities in American society.

Beyond the Politics of the Closet features essays by historians whose work on LGBT history delves into the decades between the mid-1970s and the millennium, a period in which the relationship between activist networks, the state, capitalism, and political parties became infinitely more complicated. Examining the crucial relationship between sexuality, race, and class, the volume highlights the impact gay rights politics and activism have had on the wider American political landscape since the rights revolutions of the 1960s.

The three sections of Beyond the Politics of the Closet conceptualize LGBT politics both chronologically and thematically. The first section highlights the ways in which the immediate post-rights revolution period created new demands on the part of sexual minorities for social services, especially in health care and housing. The second examines the impact of the AIDS crisis on different aspects of national and local LGBT politics. The last section considers how analyzing LGBT politics can reorient our understanding of "the closet" and illuminate the challenges for those seeking to integrate questions of sexual rights into broader political narratives, whether of the left or the right.

4. AIDS and the Urban Crisis: Stigma, Cost, and the Persistence of Racism in Chicago, 1981-1996
Timothy Stewart-Winter
5. "Don't We Die Too?" The Politics of AIDS and Race in Philadelphia
Dan Royles
6. Black Gay Lives Matter: Mobilizing Sexual Identities in the Eras of Reagan and Thatcher Conservativism
Kevin Mumford

Part III. Beyond Liberalism and Conservatism

7. Gay and Conservative: An Early History of the Log Cabin Republicans
Clayton Howard
8. "No Discrimination and No Special Rights": Gay Rights, Family Values, and the Politics of Moderation in the 1992 Election
Rachel Guberman
9. Homophobia Baiting: Queering the Trayvon Martin Archives and Challenging the Anti-Blackness of Colorblind Politics
Julio Capó, Jr.

"Beyond the Politics of the Closet draws together scholars ready to steer the histories of American governance and politics in new directions. By centering LGBT people, these writers reveal that LGBT politics transformed the state and realigned the nation's electoral coalitions at the end of the twentieth century."—Christopher Agee, University of Colorado, Denver