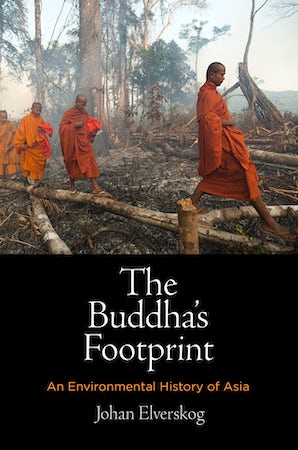 An Environmental History of Asia

In the current popular imagination, Buddhism is often understood to be a religion intrinsically concerned with the environment. The Dharma, the name given to Buddhist teachings by Buddhists, states that all things are interconnected. Therefore, Buddhists are perceived as extending compassion beyond people and animals to include plants and the earth itself out of a concern for the total living environment. In The Buddha's Footprint, Johan Elverskog contends that only by jettisoning this contemporary image of Buddhism as a purely ascetic and apolitical tradition of contemplation can we see the true nature of the Dharma. According to Elverskog, Buddhism is, in fact, an expansive religious and political system premised on generating wealth through the exploitation of natural resources.

Elverskog surveys the expansion of Buddhism across Asia in the period between 500 BCE and 1500 CE, when Buddhist institutions were built from Iran and Azerbaijan in the west, to Kazakhstan and Siberia in the north, Japan in the east, and Sri Lanka and Indonesia in the south. He examines the prosperity theology at the heart of the Dharma that declared riches to be a sign of good karma and the means by which spritiual status could be elevated through donations bequeathed to Buddhist institutions. He demonstrates how this scriptural tradition propelled Buddhists to seek wealth and power across Asia and to exploit both the people and the environment.

Elverskog shows the ways in which Buddhist expansion not only entailed the displacement of local gods and myths with those of the Dharma—as was the case with Christianity and Islam—but also involved fundamentally transforming earlier social and political structures and networks of economic exchange. The Buddha's Footprint argues that the institutionalization of the Dharma was intimately connected to agricultural expansion, resource extraction, deforestation, urbanization, and the monumentalization of Buddhism itself.

Part I. What the Buddha Taught
1. The Buddha
2. Buddhism(s)
3. Buddhists
4. Wealth
5. Consumption

Part II. What Buddhists Did
6. The Spread of Buddhism
7. The Commodity Frontier
8. Agricultural Expansion
9. Urbanization
10. The Buddhist Landscape

"The Buddha's Footprint is an important and often persuasive corrective to the contemporary idea that Buddhism has always been an environmentally friendly religion."—Robert DeCaroli, George Mason University

The Buddha’s Footprint sets forth a bold new interpretation of what, in fact, Buddhism is, as well as how historians should investigate it…Elverskog’s ‘big historical’ sweeping sketch clears the way for new, exciting growth.